HOW DO YOU GRADE THIS USA COUNTERMARK COIN? (with an octagonal UK George III Oval)

United States Draped Bust Dollar 1799 [A coin with a difference] 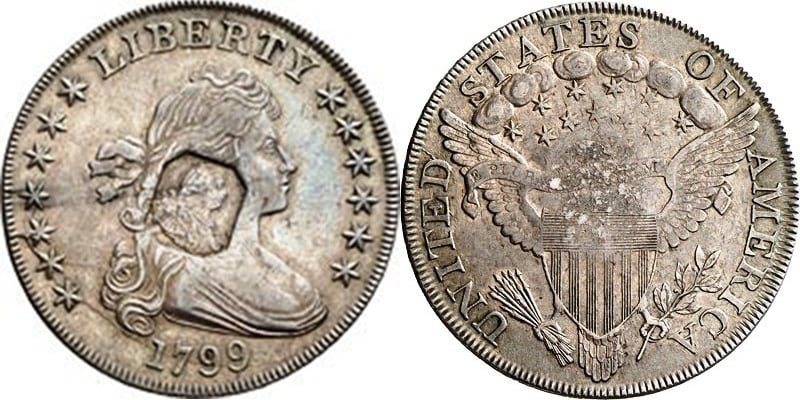 There were 4m dollar sized coins brought to the Bank of England for use in Britain, only 400’000 had an octagonal counter-mark, the remainder had an oval counter mark with George III head inside. The dies used were those used for Maundy Money.

All the same date only maybe 6 pieces exist, all dated the same, and how could this happened? Maybe a trader with connections in the United States bought a small quantity say one bag. All the pieces that exist today are the same date with the same Octagonal Countermark stamp. The stamp is that of King George III.

Two heads on one coin. This was a time of the Industrial Revolution and Britain had a shortage of Silver & Copper. One answer for the shortage of copper coins was the creation of Tokens mainly in copper with a few in Silver and Gold.

During 1797 people could import Spanish Dollars to the Bank of England. The Spanish dollar was valued at 4s.9d.

This coin was sold in recent times in 1979 from a collection called Whetmore. Price 5’600 gbp. The condition I am not quite sure as the counter stamp created a numismatic question on the grade, **members of the forum you can give your view **

For hundreds of years, Britain relationship with continental Europe has been fractious, leading to frequent outbreaks of hostility at sea and on land. Britain’s main opponent has historically been France, but during the Napoleonic Wars Britain faced the combined forces of France and Spain. With Spain’s vast overseas possessions in Central and South America providing silver for home, mainly in the form of 8 real coins (pieces of eight) minted in Mexico, Peru, Guatemala, Chile and Bolivia, the capture of Spanish ships carrying bullion to Europe by British naval forces was a regular occurrence. Rarely, the cargo contained coins other than those from Spanish America such as this American dollar, Italian or French coins.

The Napoleonic Wars created a shortage of money and materials so that the price of silver and many commodities rose over the period. To help alleviate this problem, captured foreign coins were allowed to circulate at a value appropriate to the amount of silver they contained. This value was confirmed by the use of a countermark which could be either oval or octagonal in shape. The early coins were valued at four shillings and nine pence, but were revalued to five shillings in 1800 and further increased to five shillings and sixpence in 1806 as the price of silver rose. The oval marks used on the earlier issues were made with the hallmark punch, whilst the later octagonal punch was the bust used on the silver penny. Because of unfamiliarity and of the fluctuating value of silver at the time, counterfeits of these were regularly encountered. As the vast majority of Spanish coins carried the portraits of either Charles III or Charles IV, it gave rise to the saying “The head of a fool on the head of an ass”, and alternatively, “Two Kings’ heads, not worth a crown” reflecting the issue priced at four shillings and nine pence. They circulated until the end of the Napoleonic Wars, at which point were then called in and replaced with the new coinage from 1816 onwards.

With only a handful of countermarked US dollars known including those in museums, this is an extremely rare and sought-after type with an octaginal counterstamp.

Petition Crown
The Worlds Most Prestigious and Valuable Silver Coin. Thomas Simon and two Kings of Numismatics together Petition Crown & 1804 $
5