I know we have the Ruth Bader Ginsburg thread but thought it would be nice to have a thread for all autographs related to the Supreme Court Justices, past and present.

Post pictures of autographs you have from the Supreme Court. They can ones you purchased or got through the mail. We can also use this thread for any stories we may have about visiting the Supreme Court or meeting Supreme Court Justices or other related experiences.

I have only been to the Supreme Court Building once and that was back in 1998 when I took a trip with my family to Washington D.C. Unfortunately I did not go inside and only saw the building from the outside. Very impressive building. I would love to visit again and go inside once everything is back to normal and fully open.

Back in 2005 I heard Sandra Day O’Connor was retiring and since I just starting collecting autographs through the mail I discovered a new area of autographs I could collect. I wrote to all the Supreme Court Justices except for O’Connor (she was only sending autopen then), and William Rehnquist, the Chief Justice (not responding at all ttm or autopen). I wrote to and received:

Anthony Kennedy - I think he just sent me my index card back signed (pretty sure I did not get a Chambers Card from him for some reason) - I can’t remember if he personalized it or not. I wish I could remember it better.

David Souter - He sent me a signed Chambers Card. I believe it was not personalized.

Clarence Thomas - I remember he sent me a typed signed letter on his letterhead and a signed Chambers Card. The Chambers Card was not personalized. He was the only one that sent me a letter. It was very basic thanking me for writing him.

Ruth Bader Ginsburg - She sent me a signed Chambers Card. It was not personalized.

Stephen Breyer - I believe he never responded even though I think some people got his autograph ttm back then. I never did.

Then a few months later after John Roberts and Samuel Alito were confirmed I wrote them in early 2006. Roberts sent back a Chambers Card which was not personalized and might had been autopen but I can’t remember if I was certain it was or just suspected it to be. Alito sent a signed and personalized Chambers Card. It was personalized to my full name and had written on it like “with my very best wishes.” It was totally authentic.

Then in 2011 I did not have a job and needed some money. I also had slowed down on collecting autographs by then so my collection was more or less not getting added to. I decided to sell off a vast majority of my collection thinking I would probably not get back into it and also because I knew I had like $10,000 worth of autographs all together (including some high end purchased ones). I made the huge mistake of not getting my ttm stuff authenticated and the second mistake of selling it all on eBay starting at just 99 cents each (my thinking was at the time that it would attract more bidders).

Some of the autographs were sold in small groups (like signatures all from one TV show) and some individually. I believe I either sold my Supreme Court autographs as a group lot on eBay for around $10 or it ended up with the big group lot of miscellaneous autographs I sold to a man for $200 at an Antquies Show (who I sort of still have contact with and he claimed he never bought Supreme Court autographs from me but was unwilling to look through the group lot I sold him to see if they were in there - which he surprisingly still had among all his collections). I cannot exactly remember if I sold it to him or on eBay. My old eBay listings indicate I did NOT have a Supreme Court lot listing.

Sadly I do not have any pictures of the Supreme Court autographs I used to own.

After I got back into collecting again in 2020, this time with a lot more select and specific areas to collect, I decided I wanted Ruth Bader Ginsburg’s autograph. I had been looking for one starting in October 2020. They were over $1,000! I was shocked. I then learned they were actually almost that high since 2013 when she became “the Notorious R.B.G.” I couldn’t believe it. I thought they would be around $100-$200 since she just died and autographs tend up jump up in value but never thought about the new found fame making them that expensive. The other Supreme Court Justices whose autographs I had were all still about $10 each on eBay. I decided to just wait and keep looking in case I find something for RBG. I noticed prices going down a bit around March. I also noticed fewer RBG pieces being up for auction right around that time as well. Not sure if market dried up or people holding since price was starting to decline. Anyway, one morning a few jumped up for Buy It Now/Best Offer. I knew the price was within my range but unfortunately they were personalized. I figured if I was going to get one I could afford I would have to settle for a personalized one. They had good provenance so I knew they were legit. It was half the price of what a non-personalized one would cost so I decided to buy it. I sent in my Best Offer and it was accepted. The seller was very professional and quick in shipping it out. I got it just two days later. I was thrilled. 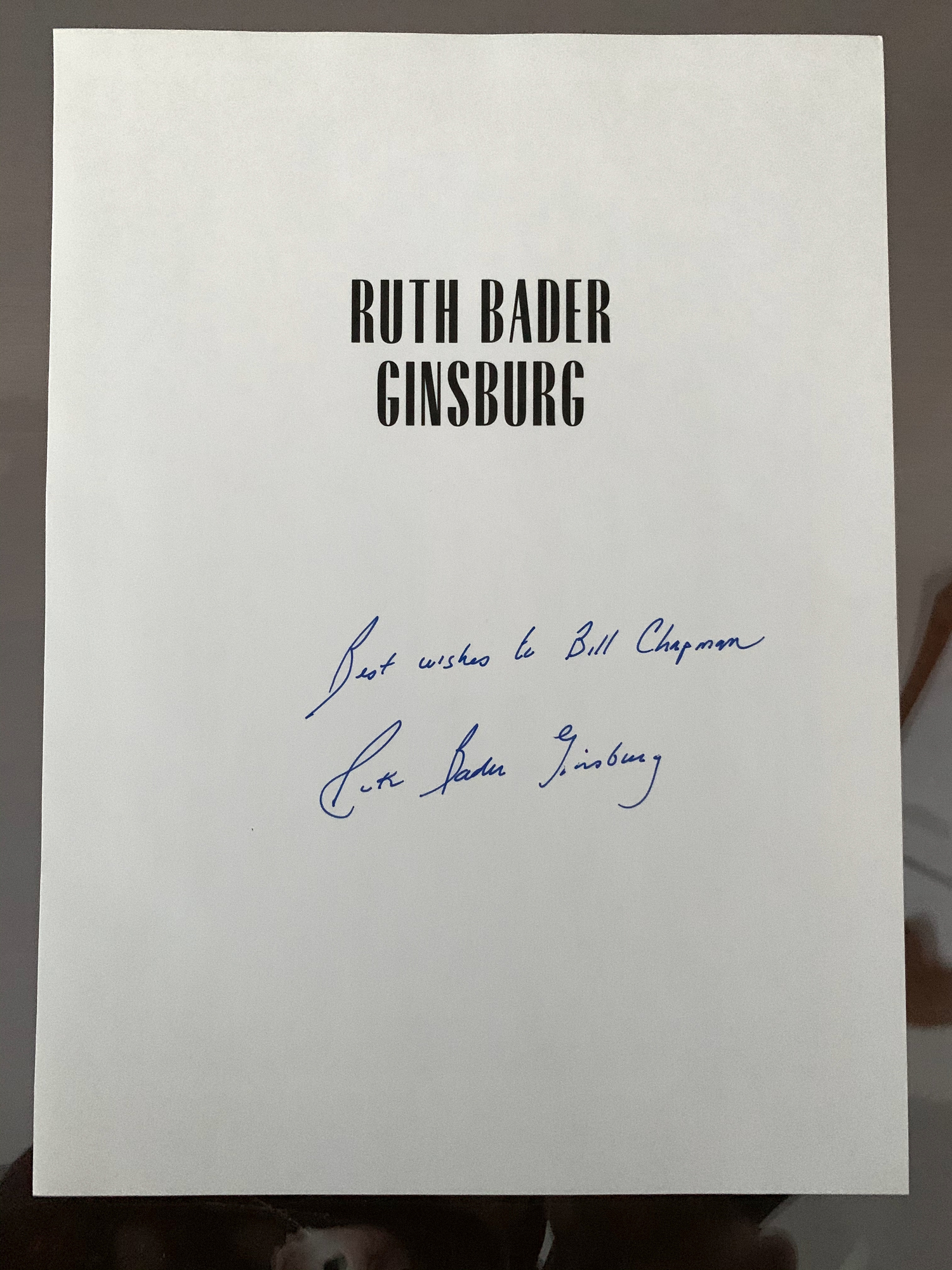 I still want to someday buy a signed Chambers Card if prices go down and one becomes available.

I have also been looking to buy Thurgood Marshall’s autograph but only want to spend $200 (if it’s a signed Chambers Card) or $100 (for just a signature).

Sonia Sotomayor is my favorite current Supreme Court Justice so I have been trying to get her autograph ttm this past year. I sent her letters and gifts over the last several months — so far no response. Keeping my fingers crossed she responds. I don’t want to have to resort to buying her autograph but I might have to if I am unsuccessful in getting her ttm…I will give it plenty more time before I worry about purchasing one.

Anyway, those are my stories. Let’s hear yours. I would love to see pictures of any Supreme Court autographs you have!