We are offering here and on our site (same terms and prices) an extensive selection of British coins, Conder tokens, and one remaining Betts medal, all chosen for their excellent-quality surfaces, reasonable pricing, considerable historicity, and high quotient of gorgeousitousness (unless you are @ricko ). Regular PayPal is fine, or snail-mail checks are fine as well. No sales tax unless you live in Virginia and buy <$1000. Free shipping over $99. No-hassle 7-day returns for any reason.

About Us: We at VDBCoins have been around for a long time; in fact, we just got the Ancient Member badge on this forum. Y'all trying to tell us something?

You can be assured of a pleasant, pain-free transaction every time, and we ship via USPS next business day after funds clear.

We hope you find something you like, and you can buy here or easily through our website, as you wish. But if nothing else, we hope you enjoy reading our descriptions and admiring some phenomenal, vastly underrated coins. UPDATE 7/18: In the Conder tokens section, we've added a nice bronzed proof 1791 Druid-Parys Mine Co. classic token.

WE'VE EDITED this to include only the coins still available and not spoken for. Some are also on eBay (at higher prices, of course) but are still getting some interest here.

And we wish you long days and pleasant nights. Kind regards, George / VDBCoins.com 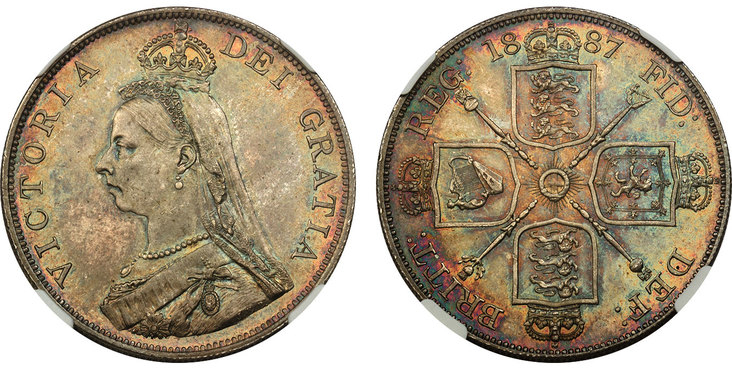 Background: The double florin was equal to four shillings, and both Arabic 1 and Roman 1 (S-3922) varieties were issued in 1887. The 1887 Jubilee Head designs only lasted through 1892. Although the small Jubilee Head crown that Victoria wore received the bitterest criticism, the reverse design was equally unpopular. One wag at the time called it “radiating tea trays and kitchen pokers.” 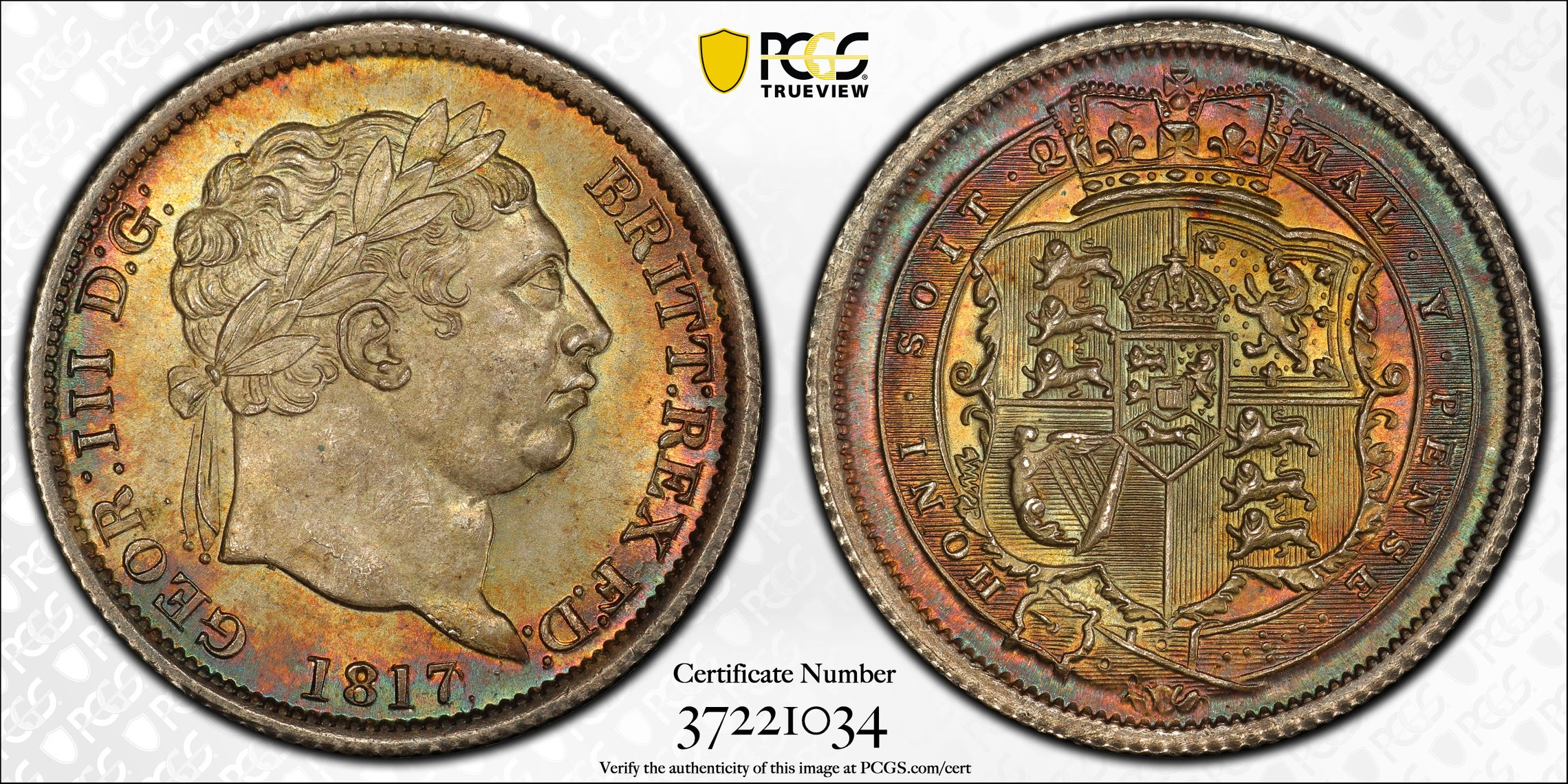 Great Britain One Shilling 1s 1817 Overdate! Gorgeous Toned MS66 PCGS S-3790 var. $950 $895
Laureate head of George III facing right, date below. Rev. crowned shield with garter edge, milled, struck on coin axis. This is a apparently an unrecorded overdate example—although we are unsure whether the underdigit is part of an 8, a 6 (which makes more sense to us), or something else. This was previously in the Heritage September 2012 Long Beach auction in an earlier slab.

There it was described as “superlative coin in terms of its preservation, boldly detailed with a crisp portrait and every tiny detail of the shield showing, undisturbed rich satiny luster, and gorgeous pastel silvery magenta-gold and blue iridescent toning. As wonderful as this shilling is visually, its most enchanting feature is what appears to be an uncatalogued overdate, with part of an 8 showing to the right of the 7 in the date. Overdate or not, this is a gorgeous coin! Candidate for a finest known Registry Set?”

It is unsurprising but bears mentioning that this beautifully toned coin is also the large Plate Coin for the issue. PCGS Population: 9 in 66, 1 finer in MS67, although we doubt a more beautiful survivor of this issue could exist.
Ex: Long Beach Signature (Heritage, 9/2012), lot 24038, which realized $1,028.13. 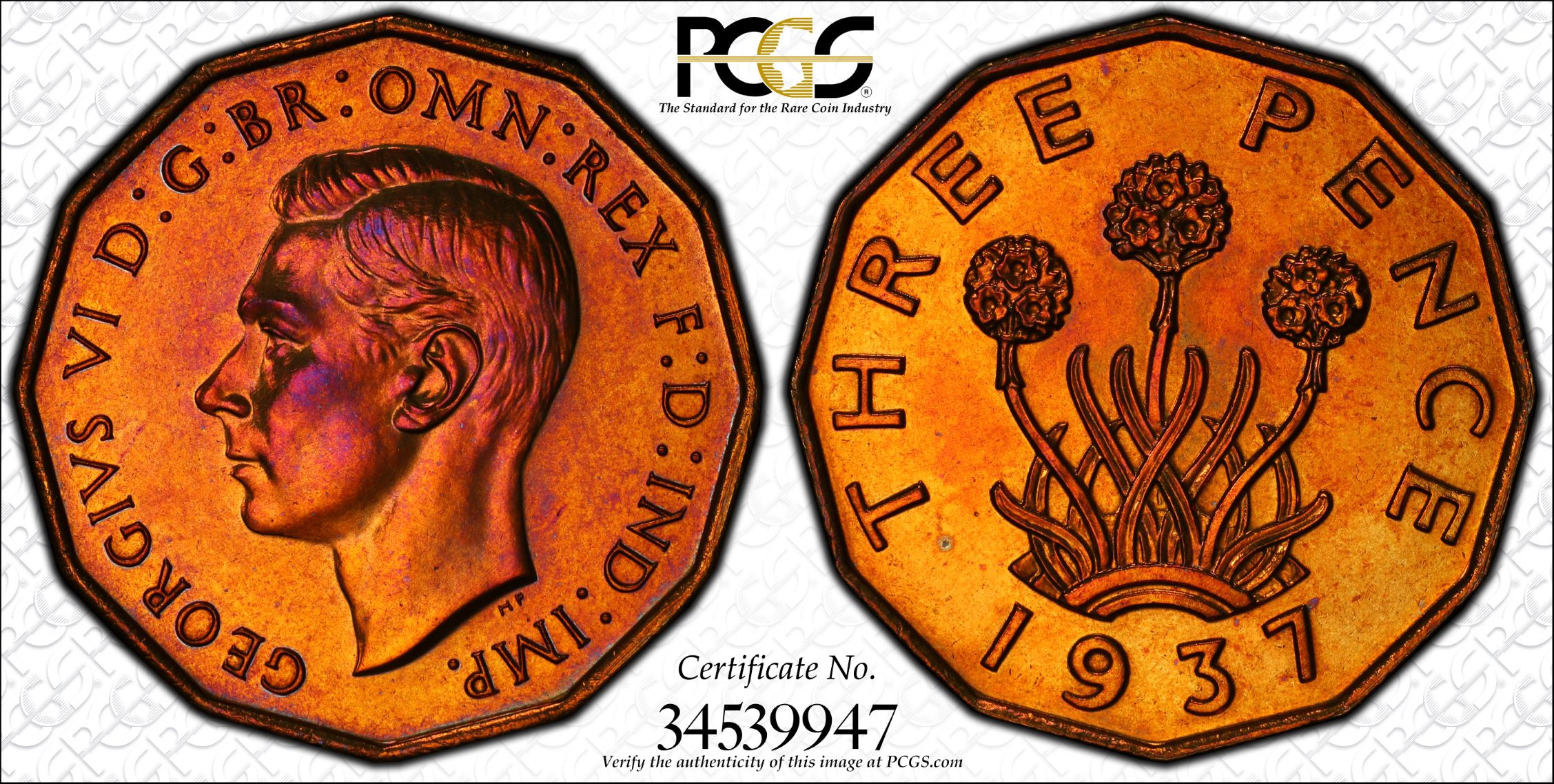 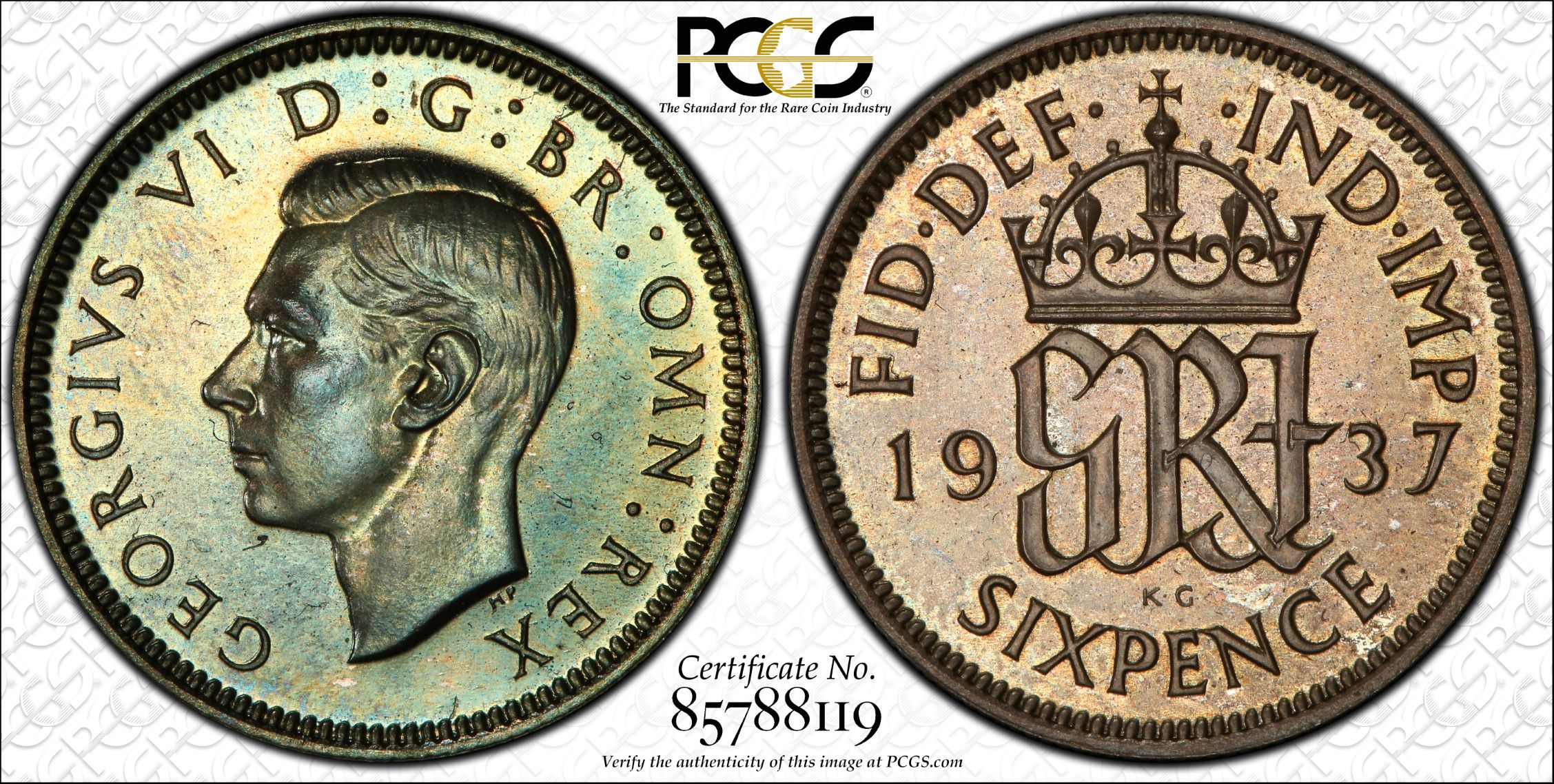 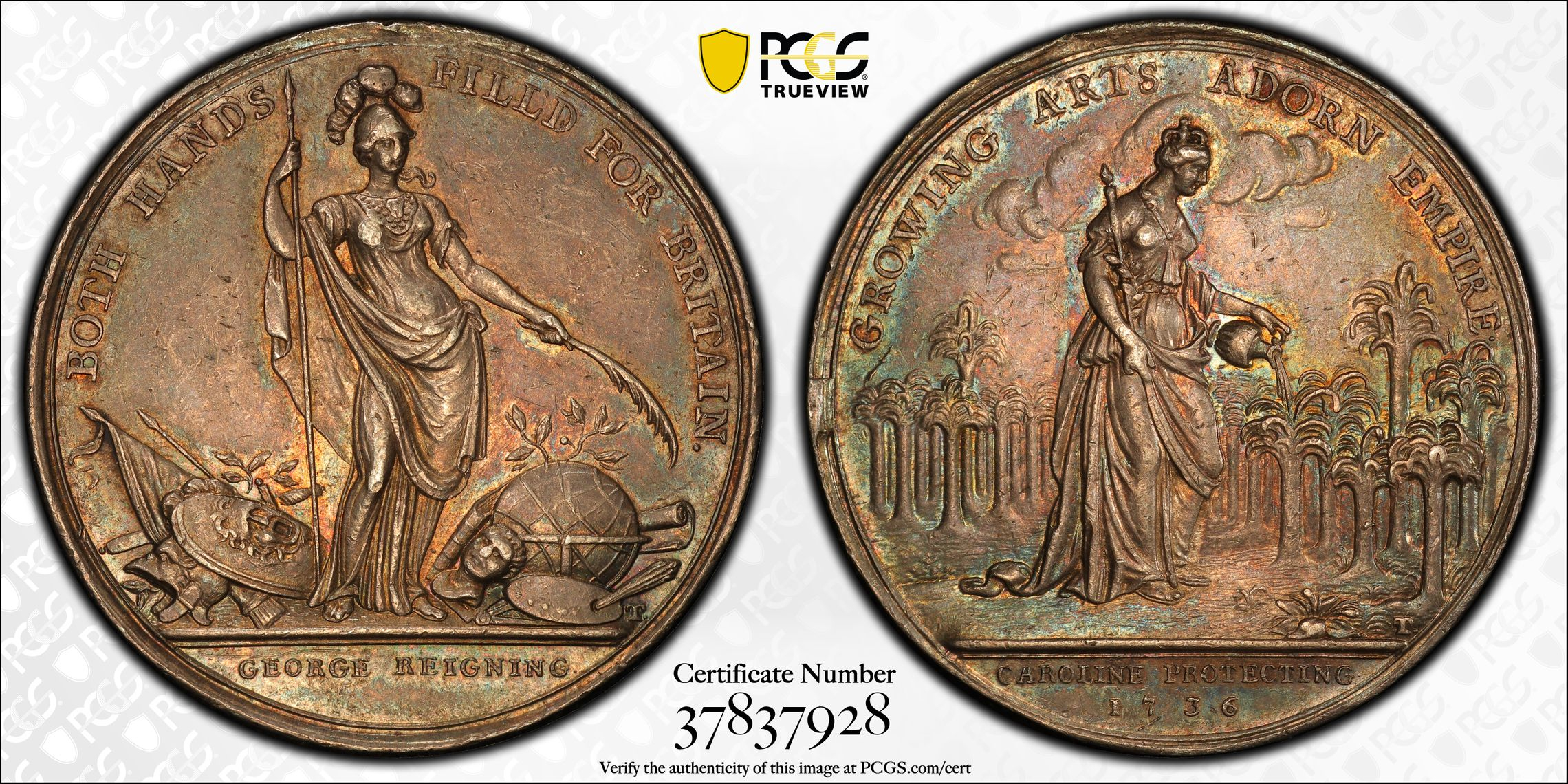 Although the Jernegan Cistern medal is listed in the C. Wyllys Betts’ seminal volume American Colonial History as Illustrated by Contemporary Medals, any relation to American history is tangential at best. Some took the palm trees and Caroline to be a reference to the Carolinas, although Betts himself disclaimed any more-direct association with America. (Betts points to the 1863 cataloguing of the Lilliendahl Collection by W.H. Strobridge as a source of the misinterpretation.) The medals were struck as “tickets” for a lottery to win a giant silver urn or cistern made by London goldsmith and banker Henry Jernegan.

This example shows beautiful color with trivial field chatter but no more than a light touch of high-point wear on Caroline’s and Minerva’s left breast and arm. 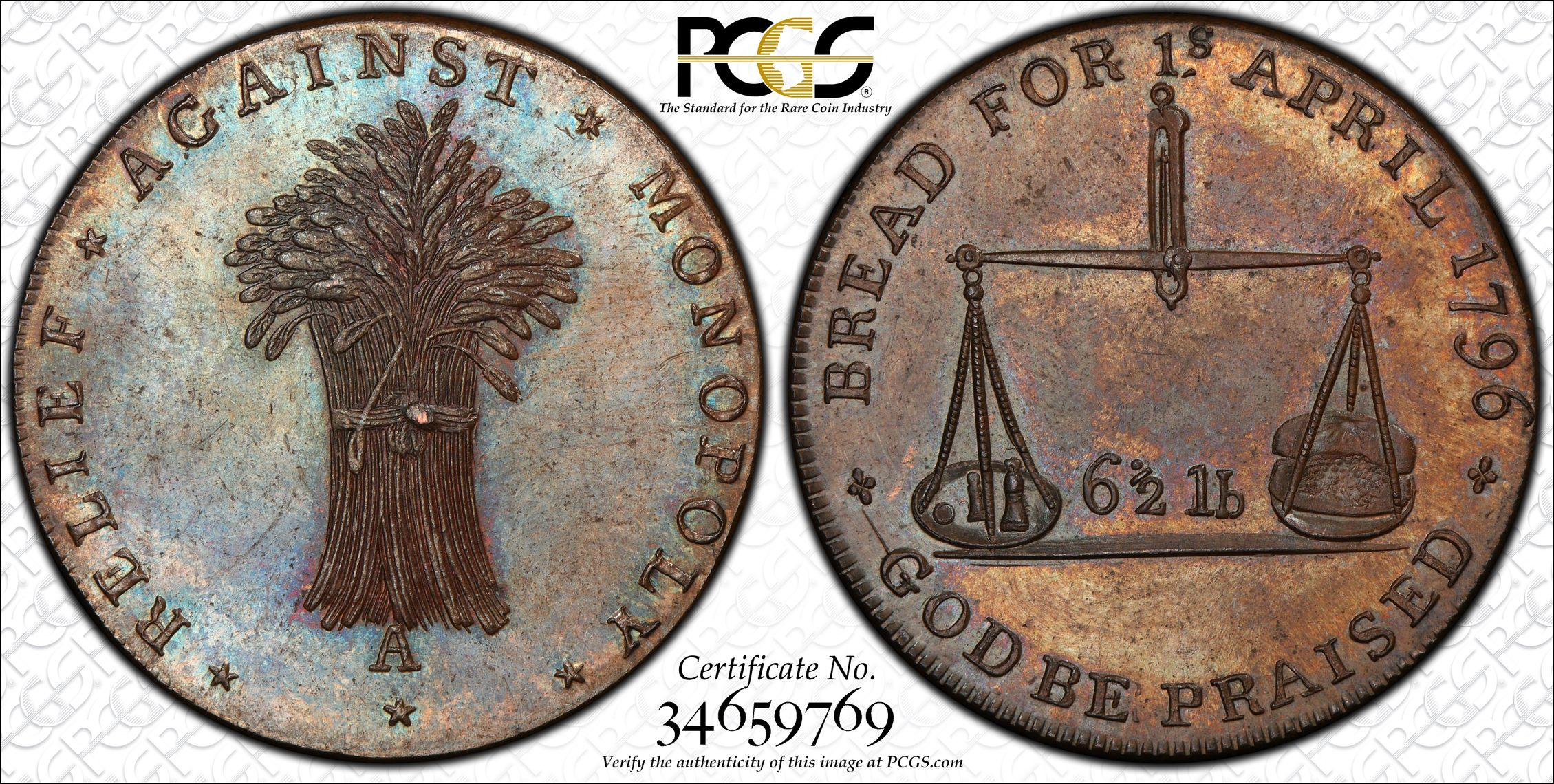 Background: The Badminton series are not currency tokens and are all fairly scarce, according to the Dalton & Hamer update by Bill McKivor dating from 2015. They commemorate the Duke of Beaufort who lessened the price of wheat during a period of scarcity of corn. Engraved by Willets, made by Kempson. 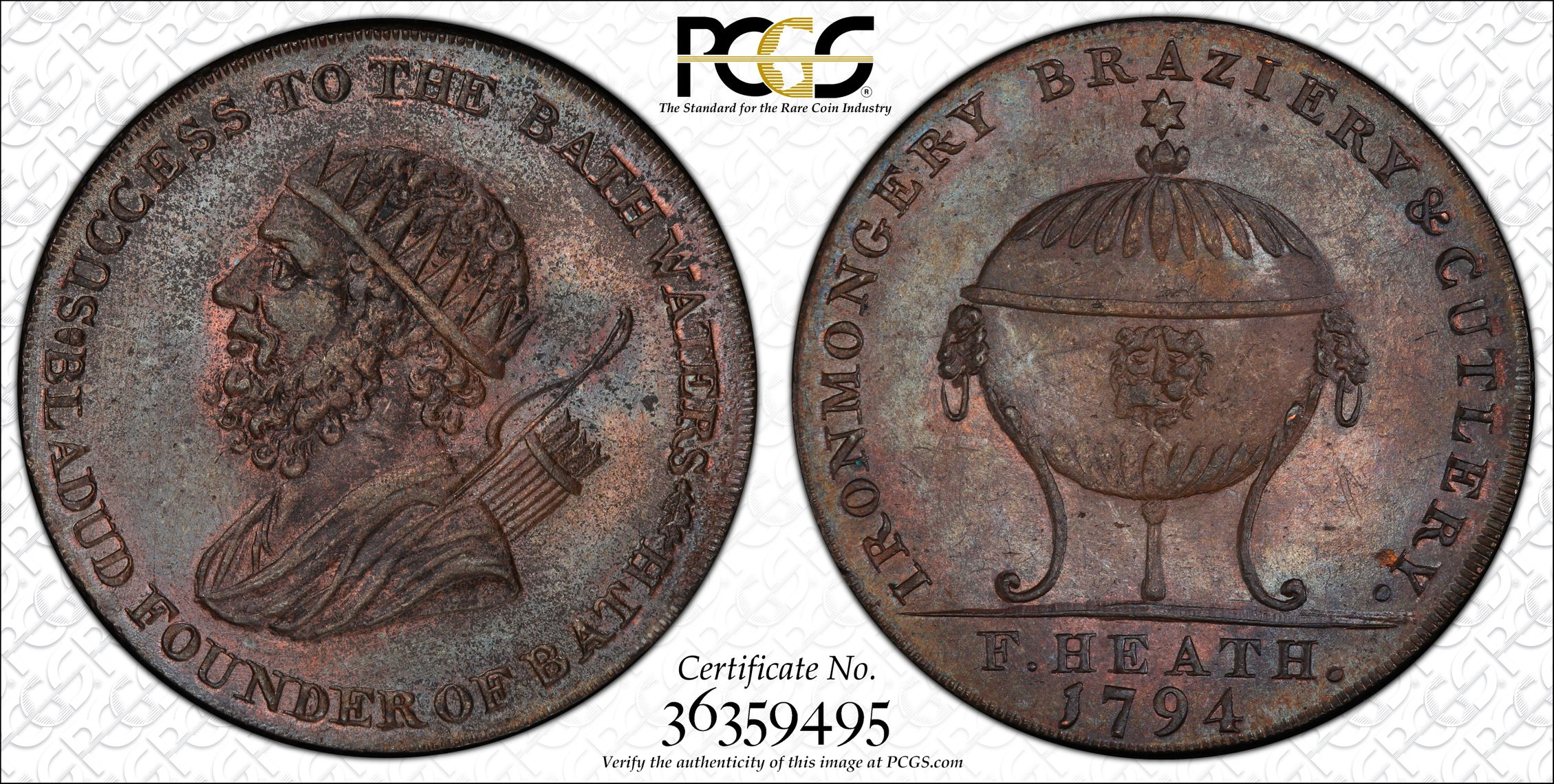 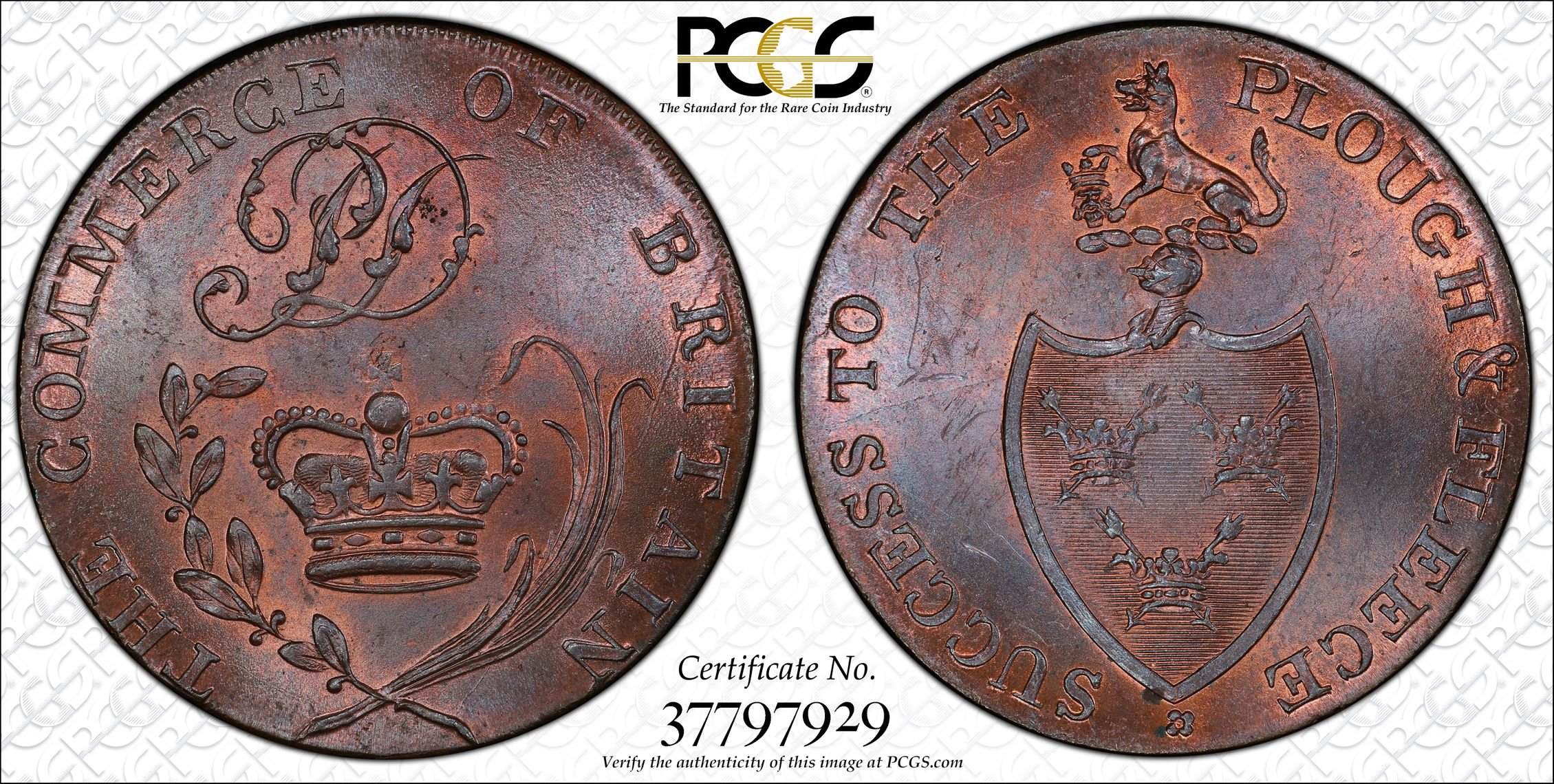 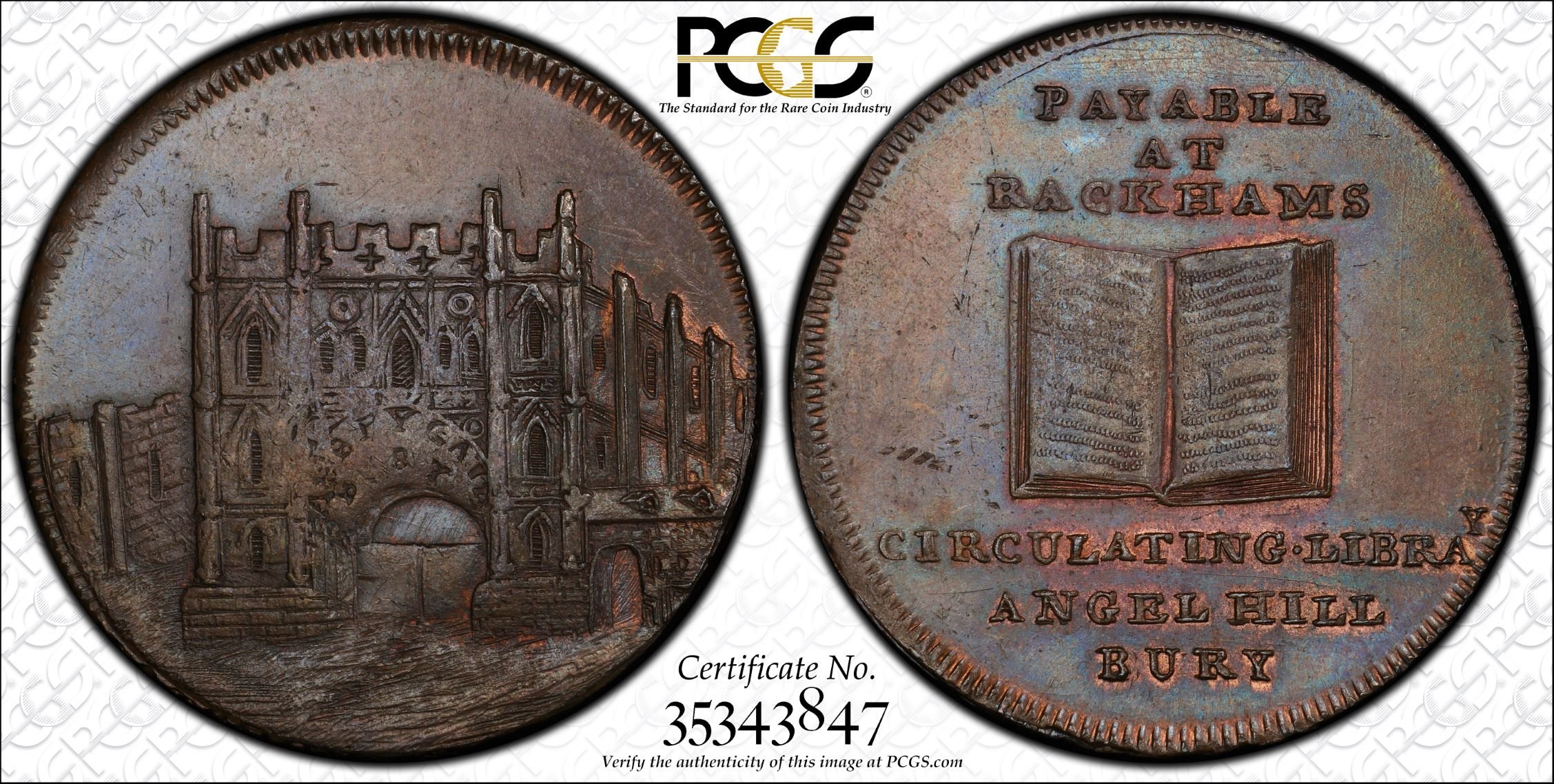 Background: John Rackham, a printer, had his circulating library opposite the Abbey Gate, Bury. 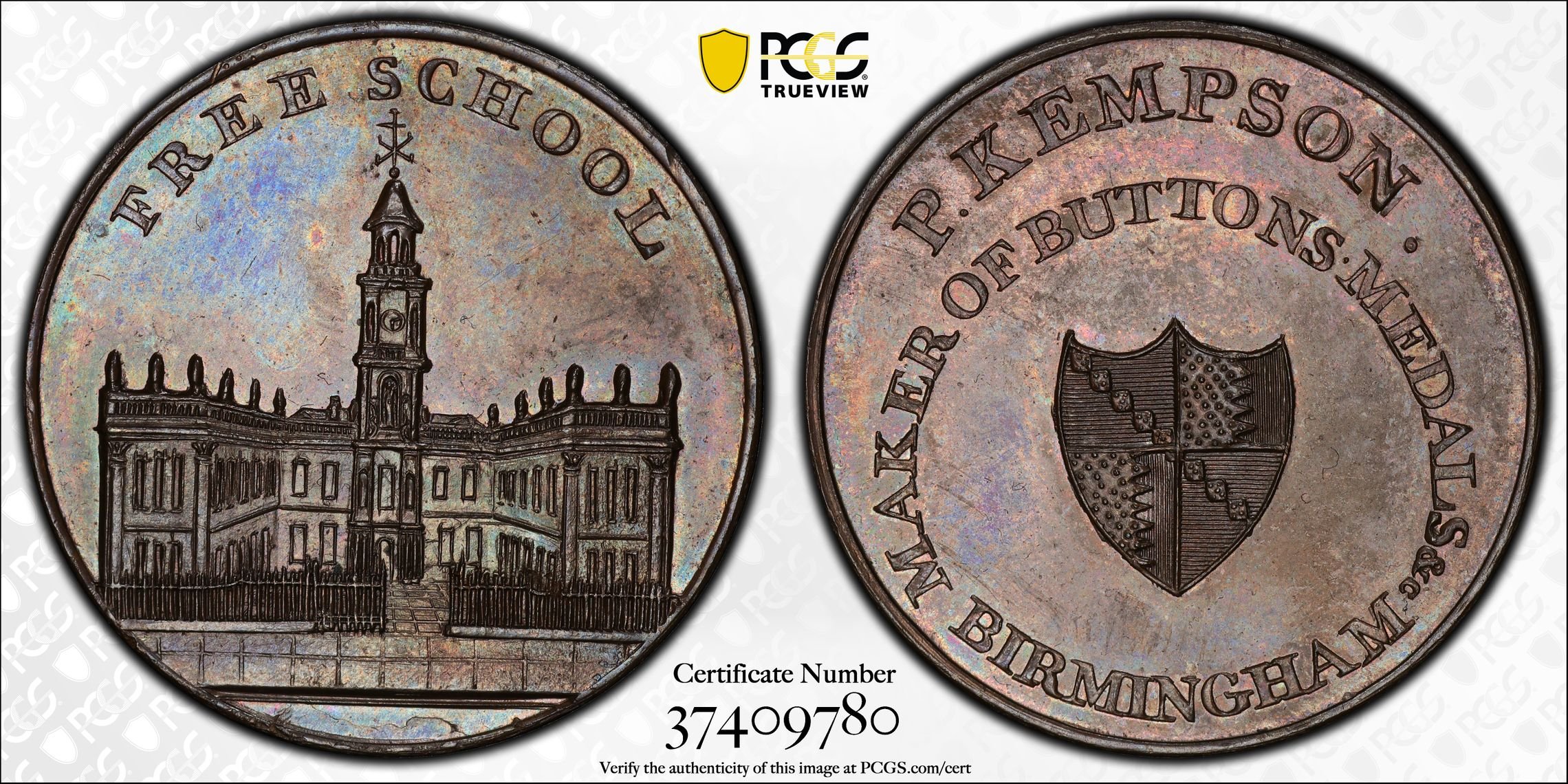 Background: Peter Kempson (1755–1824) was a prolific issuer of Conder tokens, most notably buildings and bridges, gates etc. in London and Birmingham. (Many of the early makers of Conder tokens, including Matthew Boulton of the Soho (Birmingham) Mint, started out making metallic buttons, which after all was a similar process in many ways to striking coins and medals.) 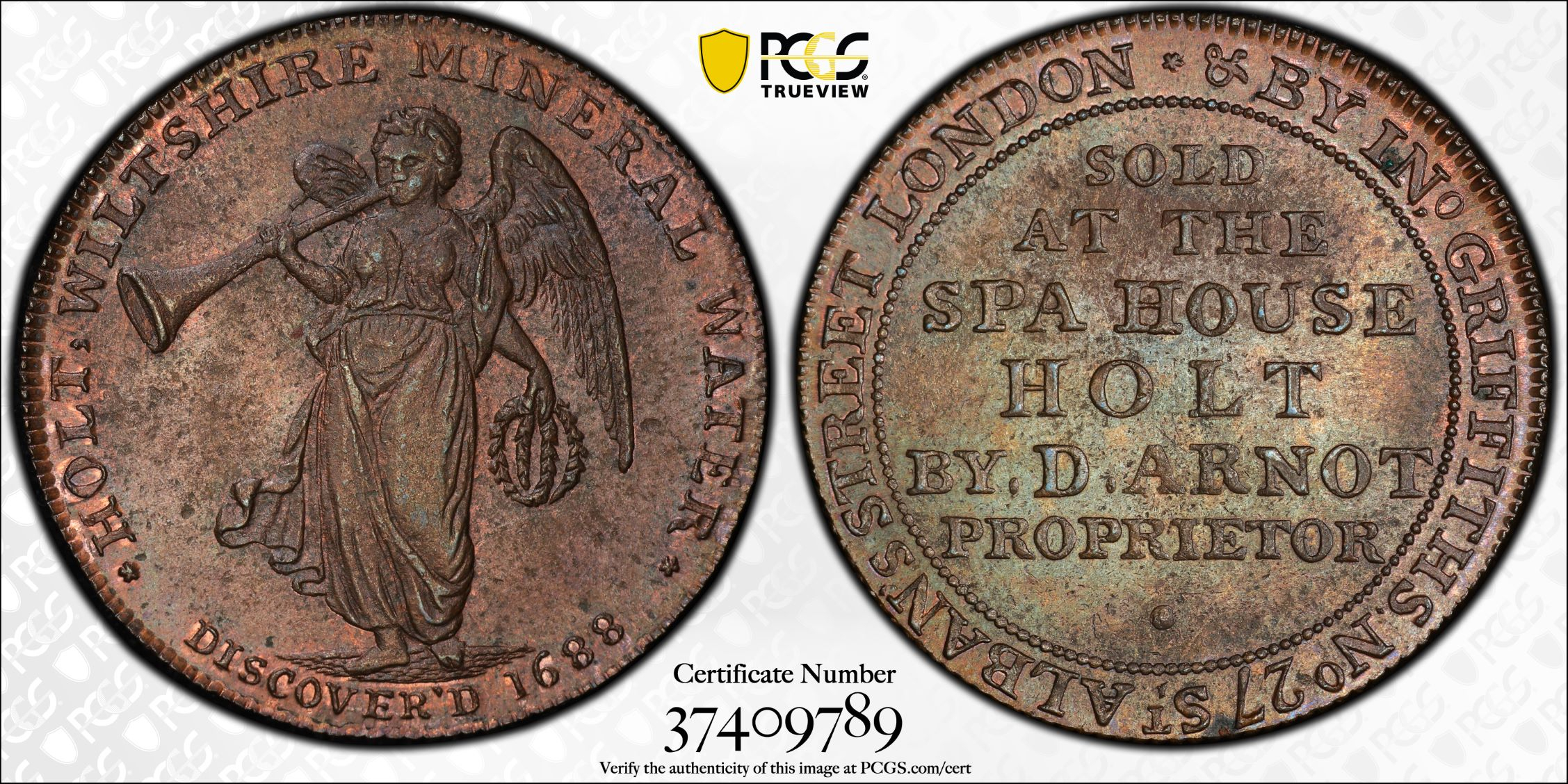 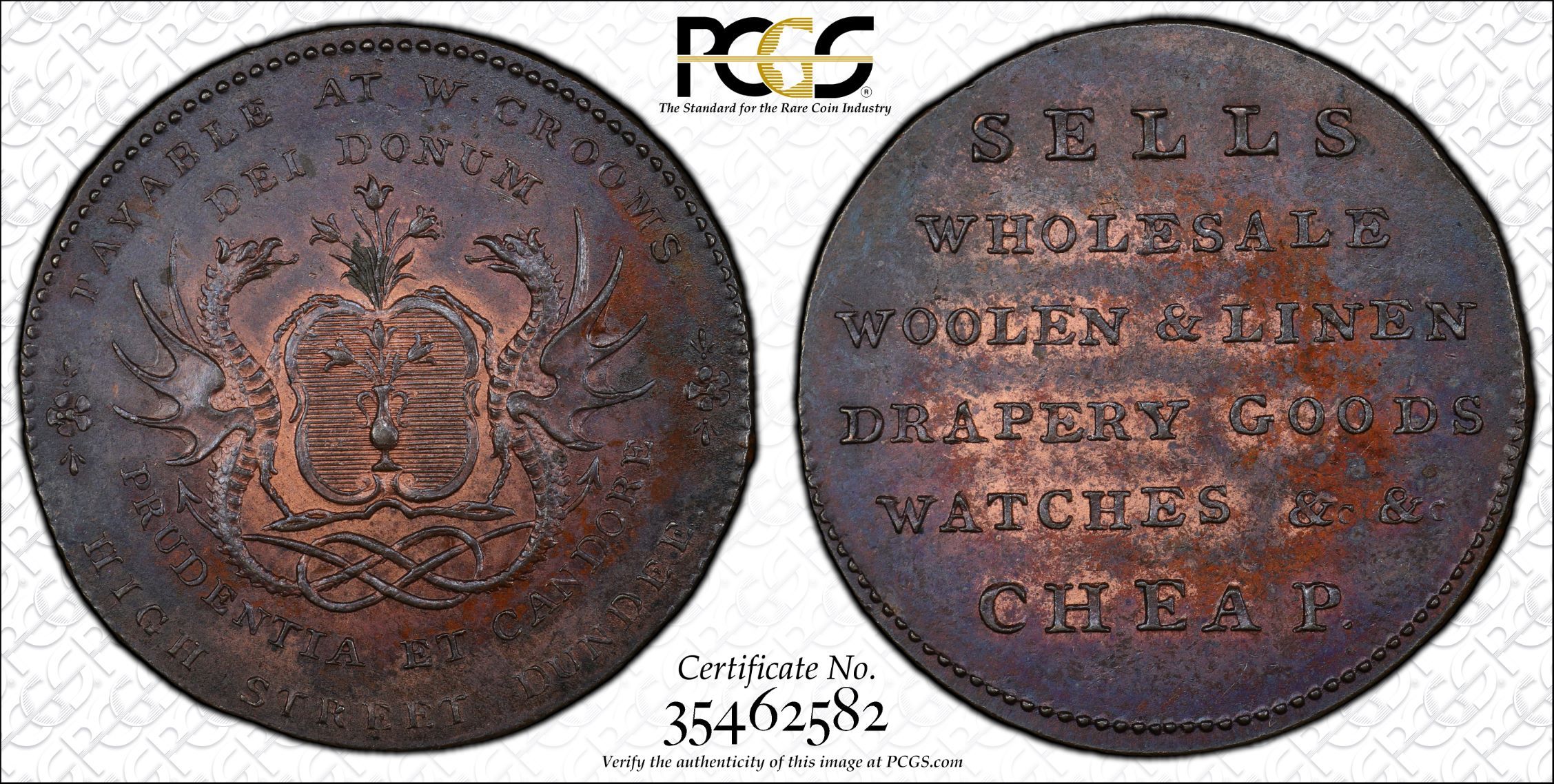 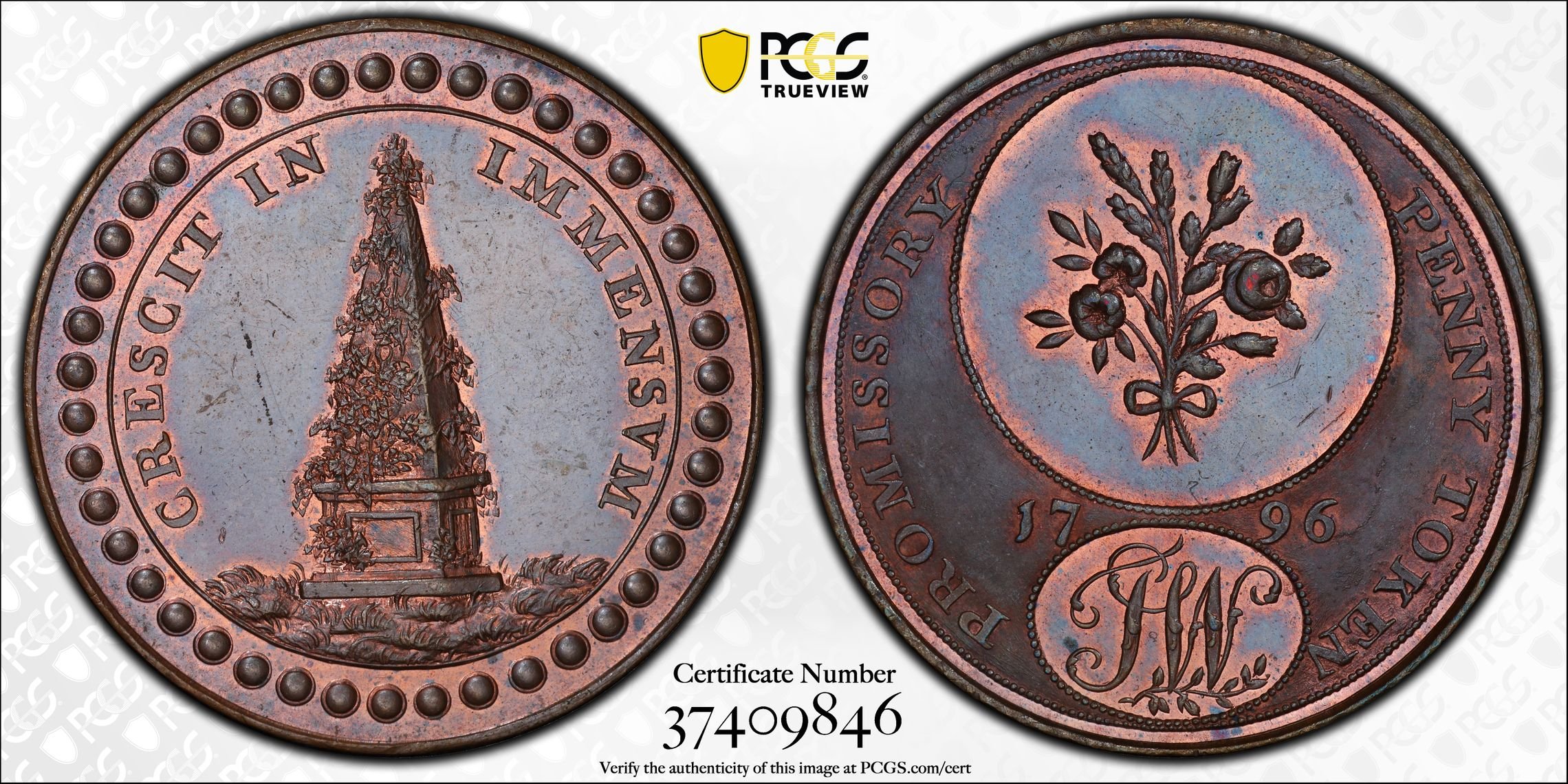 Great Britain 1796 One Penny Conder Token, Warwickshire, Wyon (noted as County by PCGS), Bouquet-Obelisk DH-25 MS64BN PCGS. $319
Obv. An obelisk partly covered in ivy within a circle of pellets, around CRESCIT IN IMMENSAM. Rev. Two cartouches, the larger containing a bouquet of flowers, the smaller T.W. cipher (Thomas Wyon). PROMISSORY PENNY around, date 1796 between cartouches. Edge: I PROMISE TO PAY ON DEMAND THE BEARER ONE PENNY. Gorgeous pastel rose and blue patina throughout, and almost certainly struck as a proof. PCGS Population: 2 in 64 BN, 1 finer (10/2019). 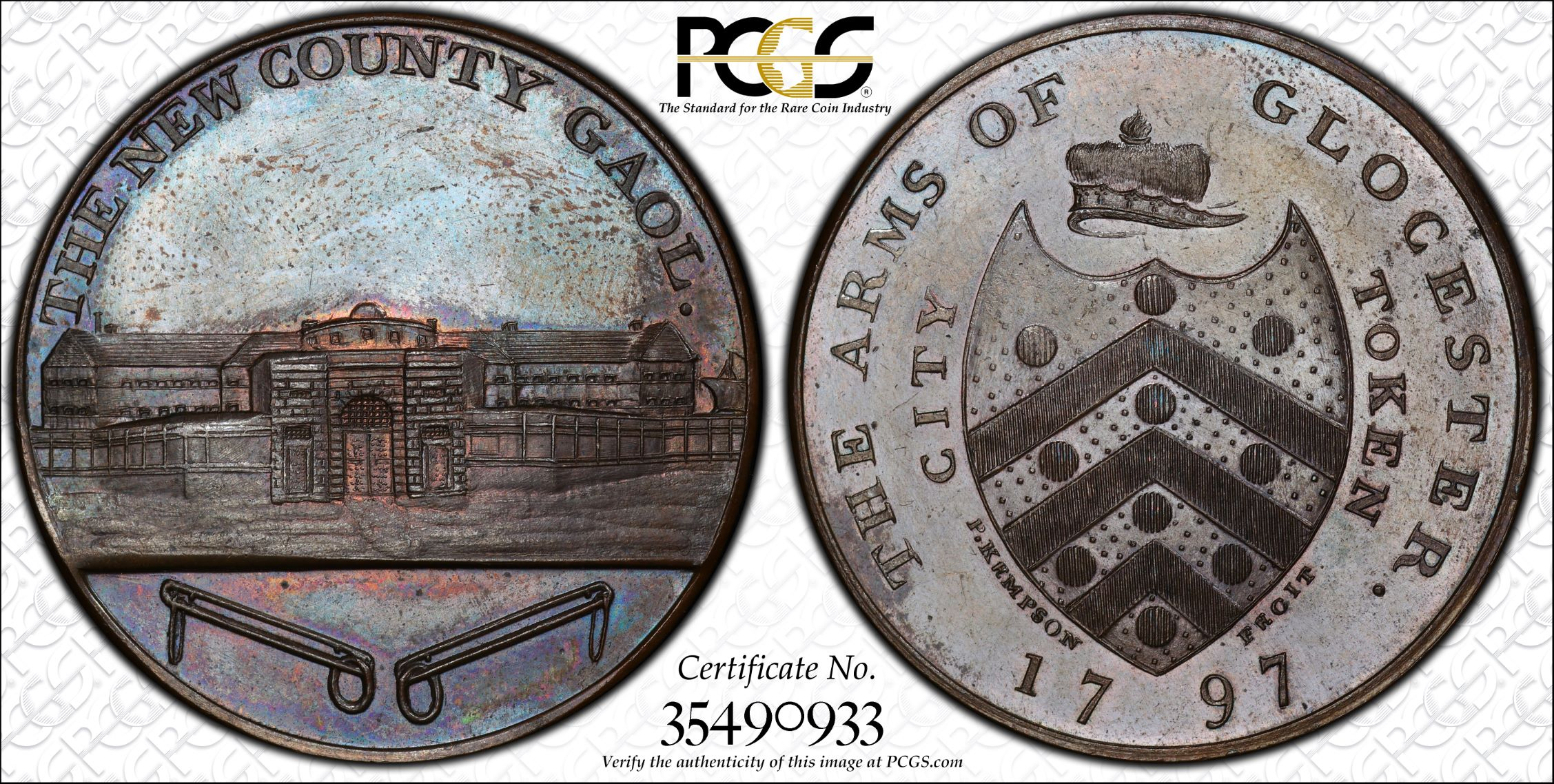 Background: Much like the Middlesex buildings of Kempson, this Gloucestershire series shows various building views. A new reverse die, lacking CITY TOKEN, with GLOUCESTER spelled properly, and signed OTTLEY in script, dates from the 19th century. 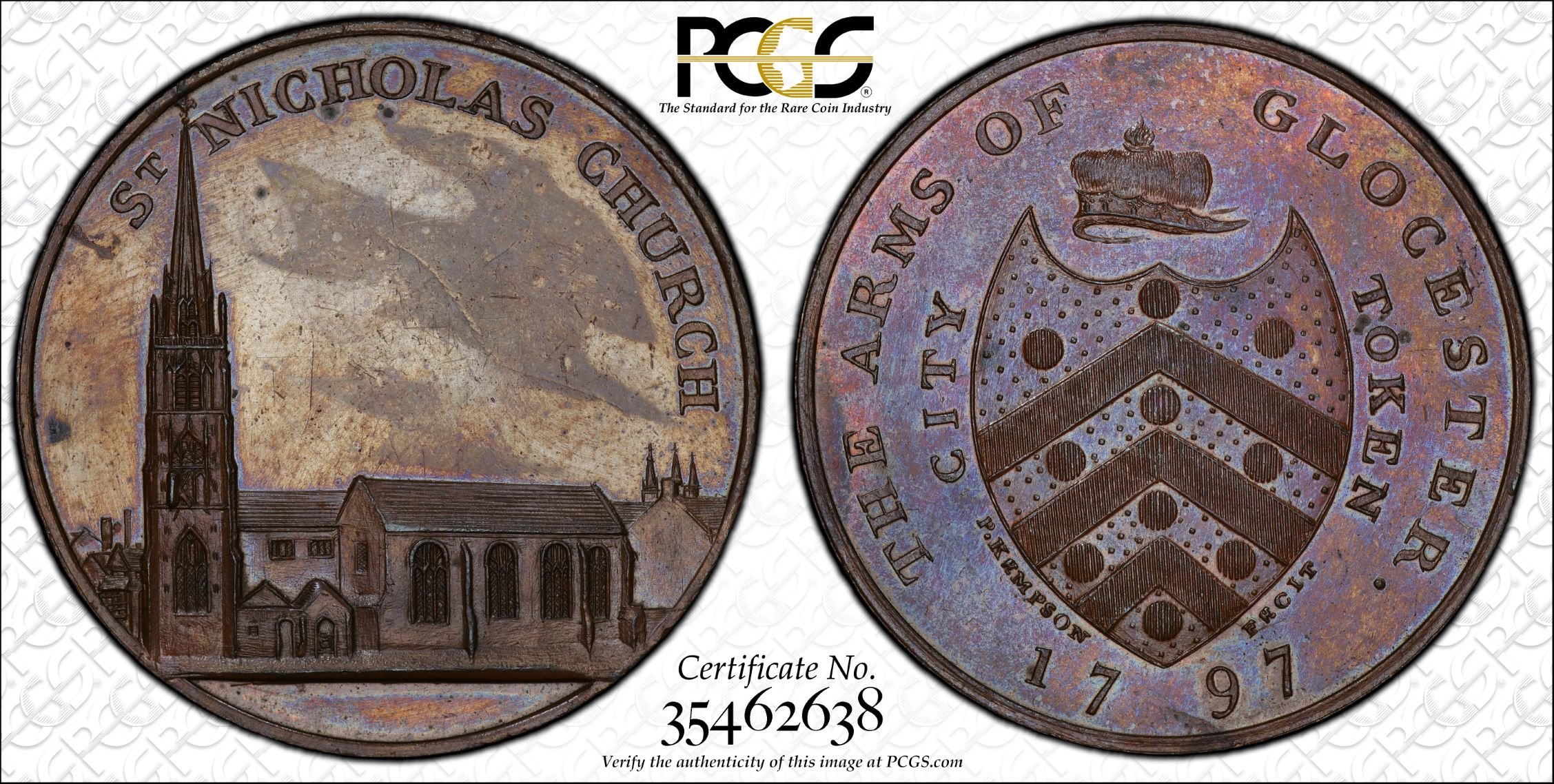 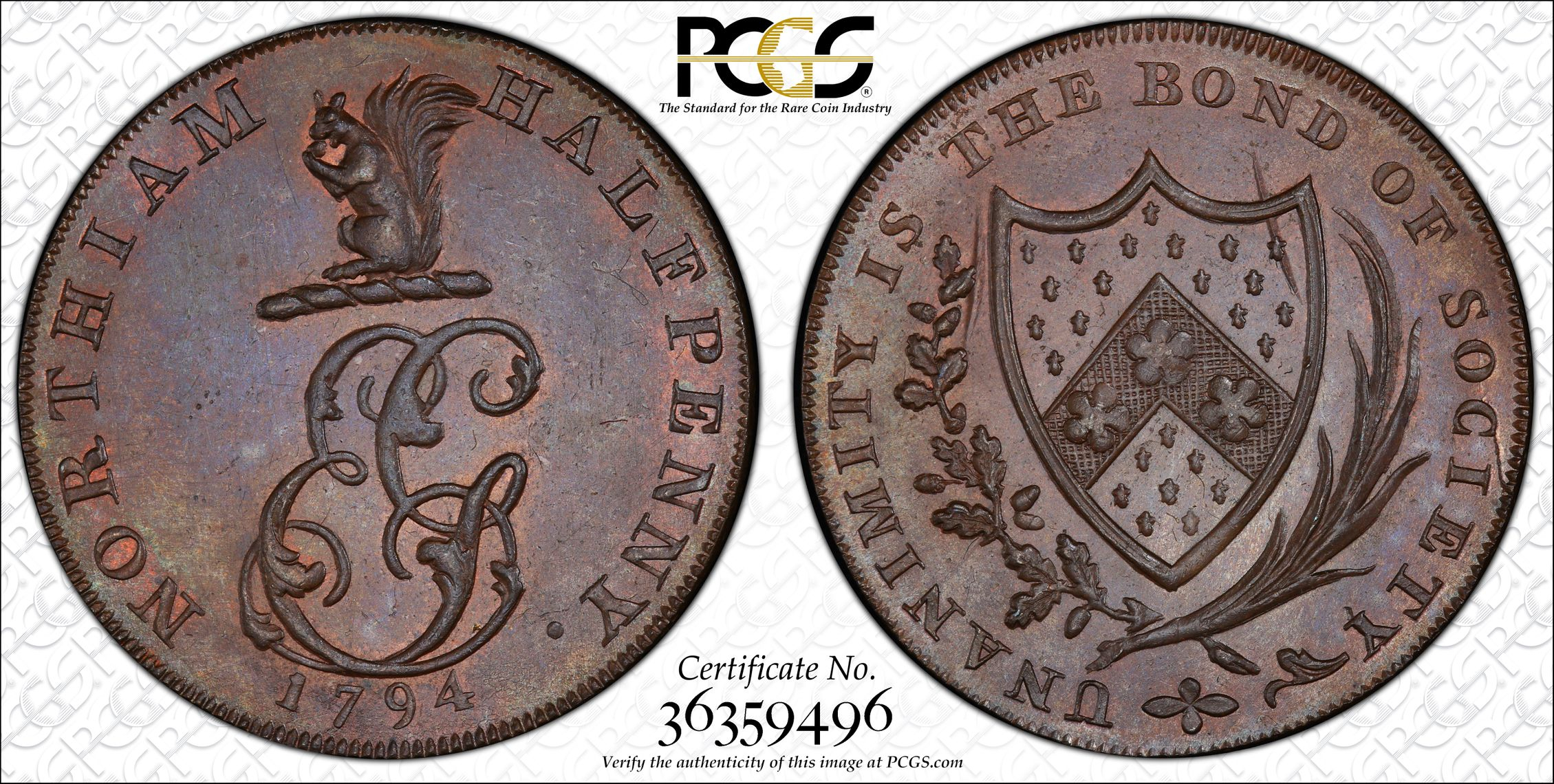 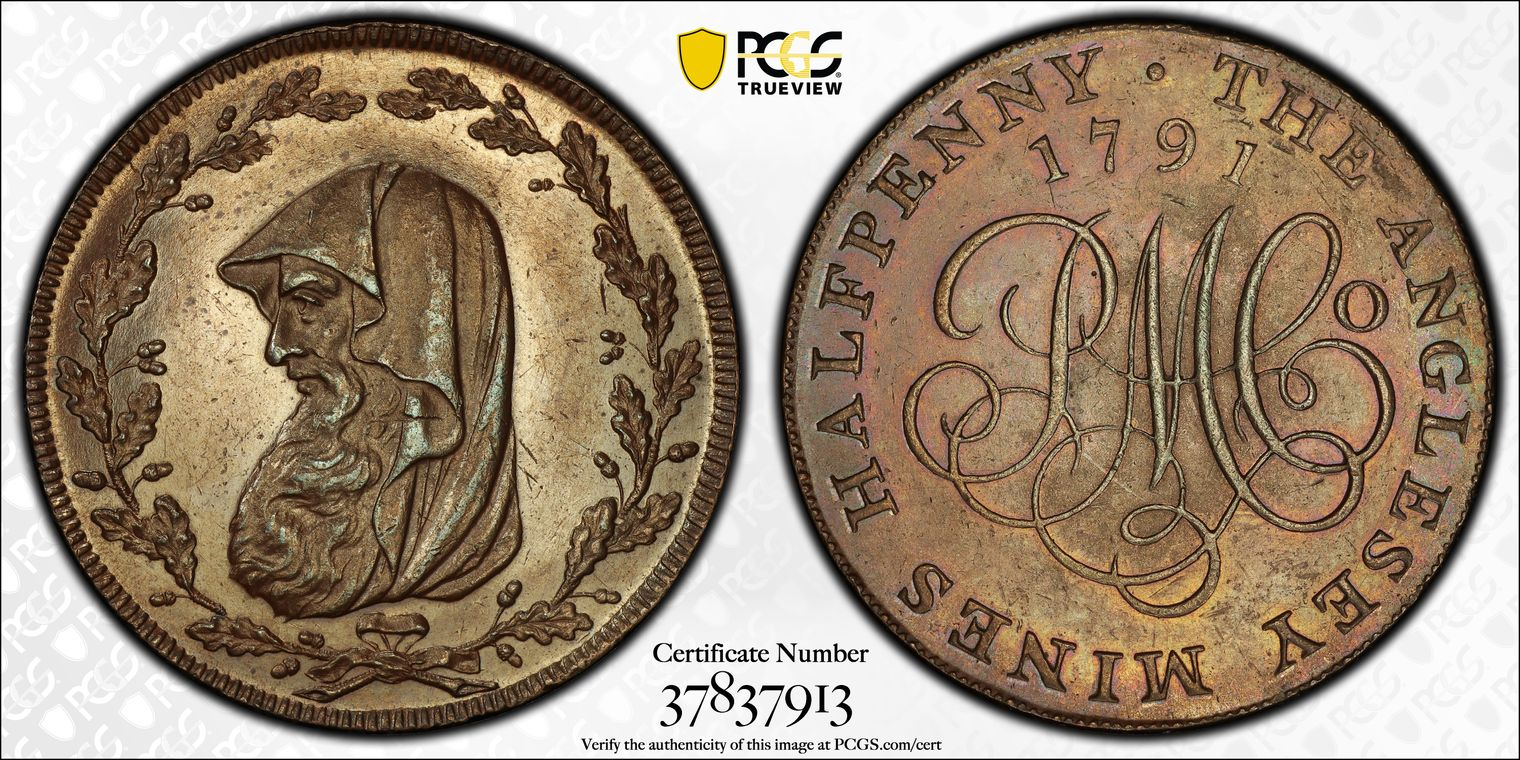