So, if you buy into the PCGS generations I proposed in another thread PCGS Generations - an attempted update, it makes organizing PCGS samples easier. The scheme presented here is based on the PCGS generation labels as a foundation initially proposed by Conder101. After all, it only makes sense that samples were distributed at the same time as the generations listed above to promote them (well, there are some exceptions, but they will be noted in each section). It's real strength is in being able to find a sample quickly and efficiently and knowing whether you already have it or need it.

Cameron Kiefer (CK) was the pioneer who started organizing samples from many TPG's and it's a great asset that can still be found at Sampleslabs.com (referred to as SS from here on out). The weakness is that his generations relate more to when the sample was discovered by him rather than how they relate to each other by generations. Since it hasn't been updated for several years, it makes organizing more recent samples difficult. Other schemes involve the generation of the plastic holder (PCGS Museum of Holders) or organizing first by denomination (David Schwager).

Rarity This is somewhat subjective and is based on what I and a few friends have seen. Also, if not on SS (up until it was no longer updated), it's probably at least scarce!

There are special issues that defy simple classification by generation. The more recent European and Asian issues for example will be organized by their date of issue rather than by generation.

Sample 1.0 and 1.1 These are reserved for white label rattler samples, should one ever be discovered. 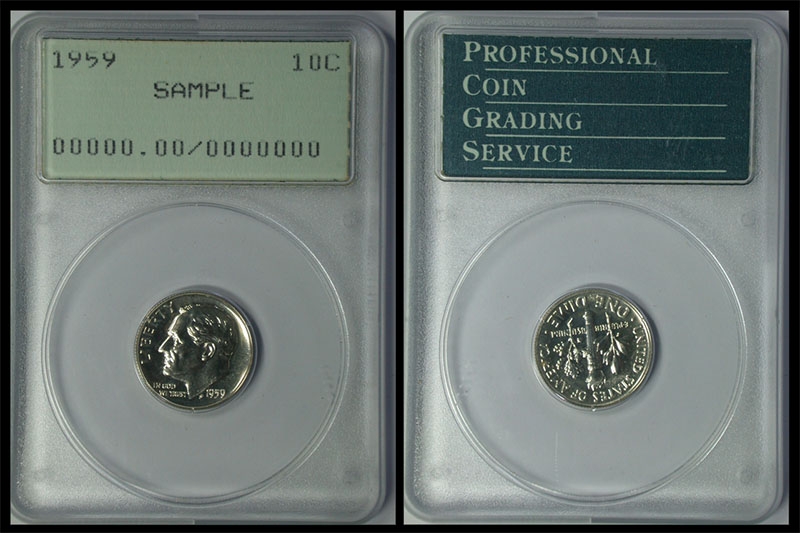 If you have a sample with a earlier date, a picture would be appreciated. Cameron noted these come in MS and proof format with the grade on the insert still "00" - I've chosen to lump them together rather than create another "generation" for this style. If a label calling the coin proof were to appear, now that would be different, as noted in the 1.5 section. A 1959 example described as proof went for $204 March 2015. The common ones typically bring around $200. 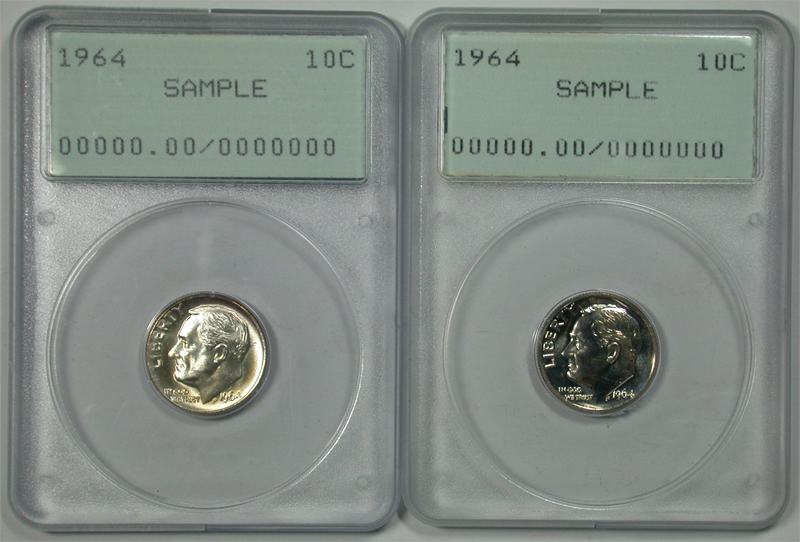 An astute sample collector on the forums informed me that the proof coins were made in a run where the top of the letters and numbers are weak to partially missing, as shown on the right, the MS coins (left) with normal tops. I had never noticed that before but it seems to hold true! Thought I had a complete run until he pointed that out to me. 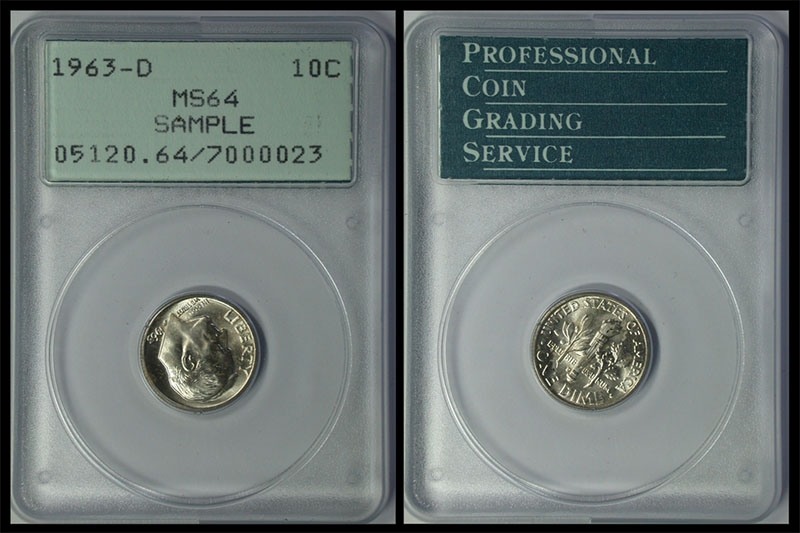 Sample 1.3 This generation is a revision from August 2016 after a discussion with Robert Paul and Mike Sherman. There is a date run of coins with coin number 5120 irrespective of the date or mm on the coin. It is theorized that this preceded Gen. 1.4, possibly because of incomplete development of the coin numbers for "modern" coins. This is analogous to the existence of Gen. 6 coins in great number for colonials and moderns but missing for coins with well established coin numbers. It's guess work at best and will be revised as needed if more accurate information comes available. Dates seen are 1960 P/D through 1964, no 64-D yet seen to date.
60, 60-D, 61, 61-D, 62, 62-D, 63, 63-D, 64 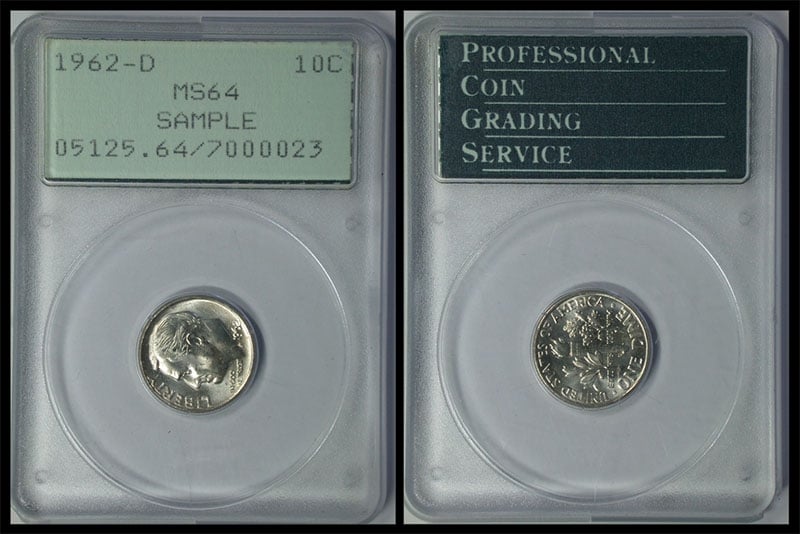 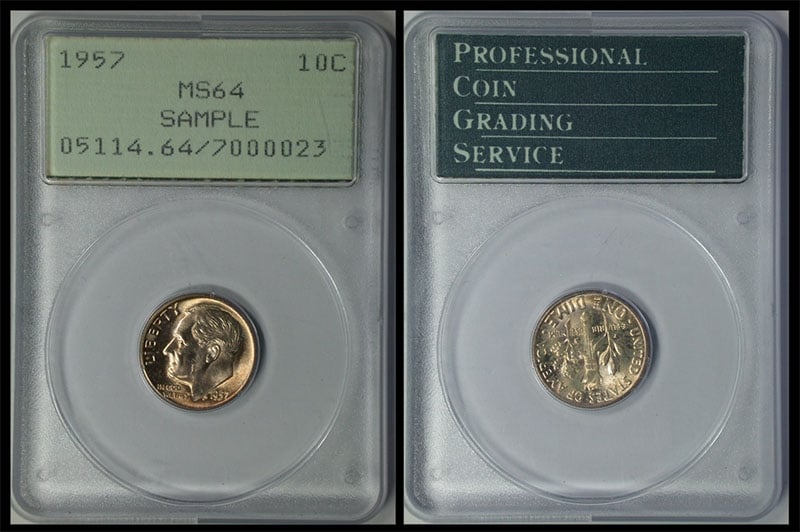 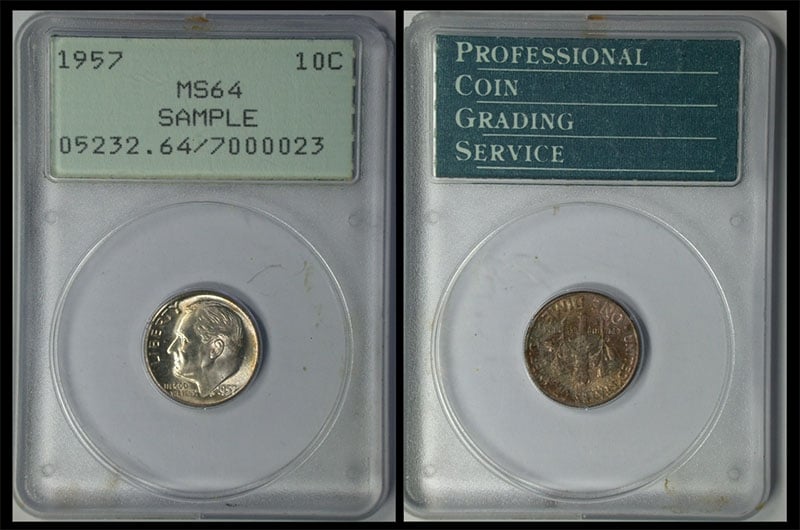 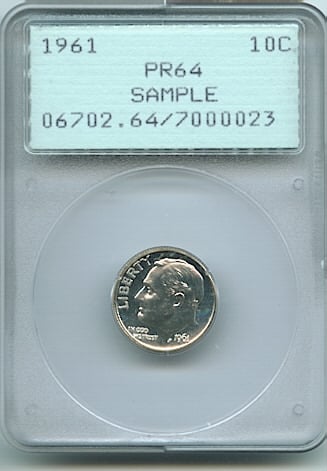 Sample 1.5 This one is worth calling out as different, a rare version of the Sample 1.2/1.3 style with PR instead of MS. Picture is borrowed from SampleSlabs.com. Fun coin number that corresponds with a Proof 1961 Franklin Half. Said by Cameron to be rare and he is right. Every once in a while you'll see a MS rattler sample with a proof coin number. 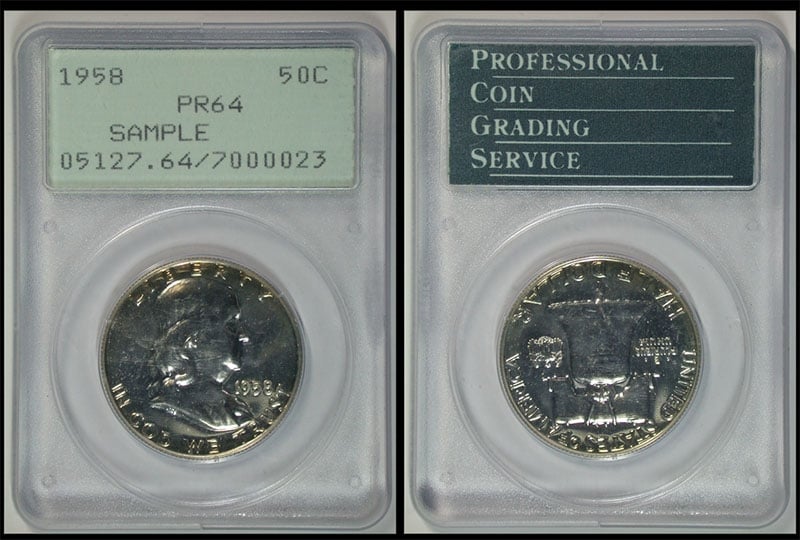 Sample 1.6 Now this one is really cool! Different label than 1.4 with "SAMPLE" shifted left, only the 4th known Franklin Half in a PCGS Sample holder and the only one in a rattler! Coin number is for a MS 1963-D dime. 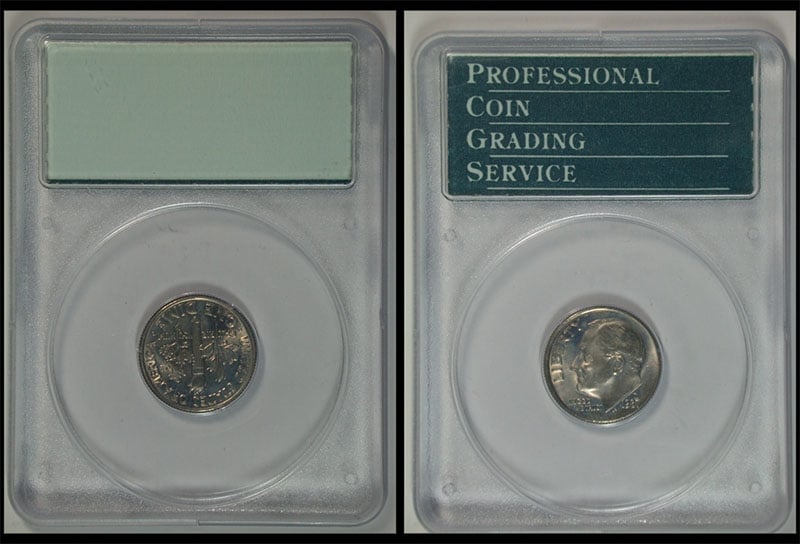 Sample 1.7 This coin is not a sample but it is pretty cool. The coin used fits the time period (1987-D), is well outside the usual date range used and is reverse holdered. Nothing special about the coin so it's not a regular submission with a mechanical error label. This slab came from a former PCGS employee. Story from seller notes that PCGS was testing a new sealing machine and the employee pulled this coin out of his pocket and the machine was tested on this slab. A 1960-D in a similar slab, obverse forward, sold for $510 on Ebay 4-27-19. 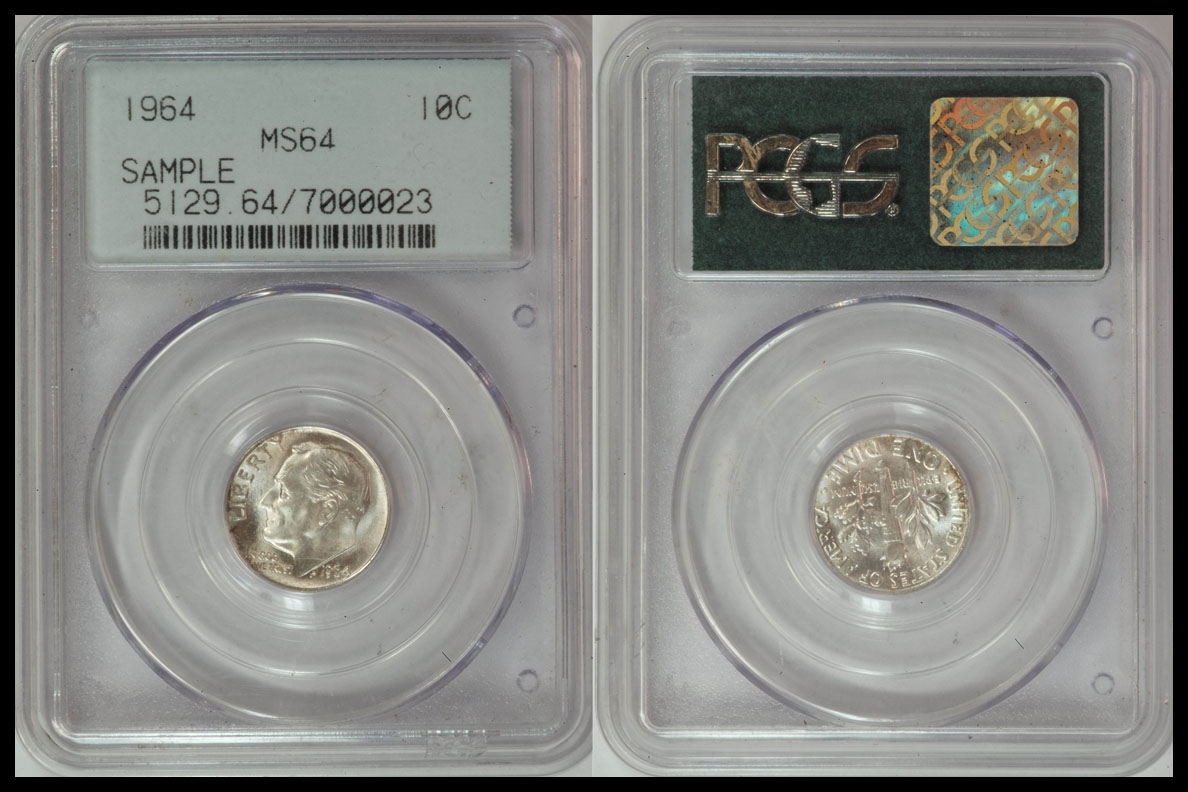 Sample 2.0 This is the basic generation 2 holder which carries on the same numbering scheme, coin number with nonsense serial number 7000023. The coin number is the same no matter the date! Most commonly seen with a 1964 P or D Roosevelt dime, 1956-D and 1957 the earliest I've seen. Forum member Echoes nabbed a 63-D off ebay in early 2018, the 1st one I've ever seen. It would be interesting to know if this serial number means something to PCGS?? Nothing comes up in the cert. verification with this number, unlike later samples. This is a fairly scarce sample.
MS64 - 56-D, 57, 62-D, 64, 64-D

This is the Doily type that comes in 3-4 variations. This from CK: "Within a couple of years, a dealer got the bright idea to counterfeit the PCGS slab and make his own slabbed coins. It worked for a little bit, but he was soon caught. It brought to the attention of PCGS (and the other services) that better security had to be used on their slabs so that if someone tampered with a slab, it could easily be detected. The newer slab had an outer ring and a hologram on the back. The label was printed with thousands of small dots on a dot matrix printer. The “Doily label” slab as we call it today was born but did not last for long. Made from August of 1989 through January of 1990, few of these samples survive."

The variations of the samples will be described below. The only one not seen to date is variation 3.0.20 - a Doily with no PCGS at the top - rare also with non-sample type coins. 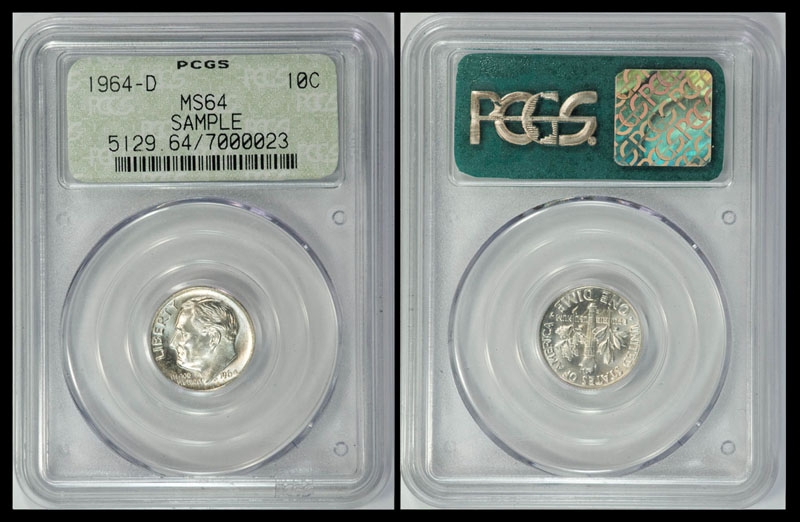 Sample 3.0.1 This is the rare Doily sample that Oreville has posted so much about. It differs from other Doilies in that it doesn't have the white background behind the serial number and the corners look rounded, perhaps hand cut. "Sample" is centered under the grade rather than to the left. The Doily design forming the background on the insert is different than the following generation. The rarity is unknown but Oreville estimates the population to be 10 or so. The coin number and serial number are the same as for the generation 2.0 samples. One of these paired with an all 0's rattler sold for $700 in 2013 on eBay. eBay auction price realized for another on 3-6-16 was $609. On 4-12-21 one sold for $1288! 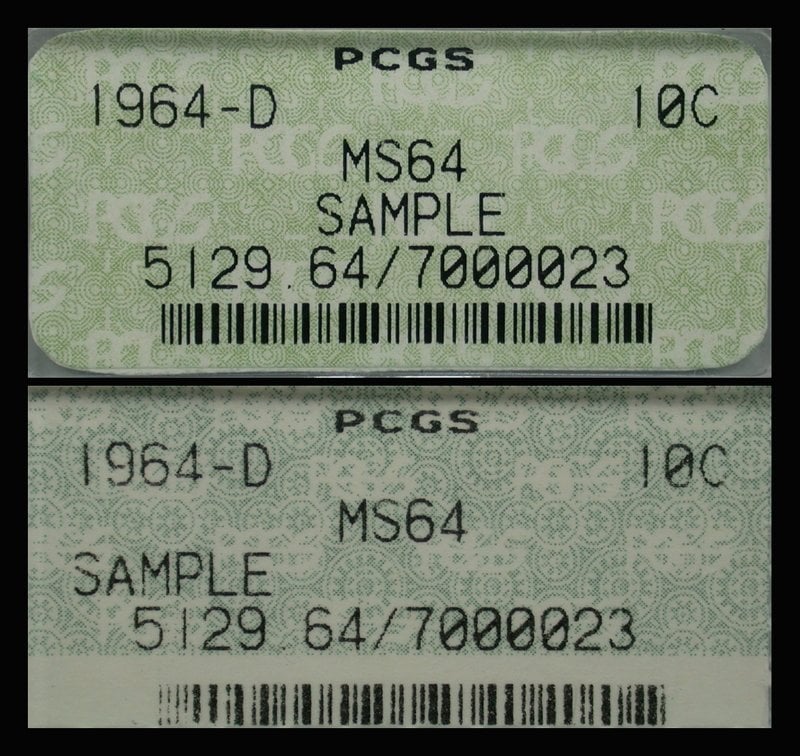 Here's a close up of the doily styles - you can see that the designs making up the background and PCGS letters are quite different. 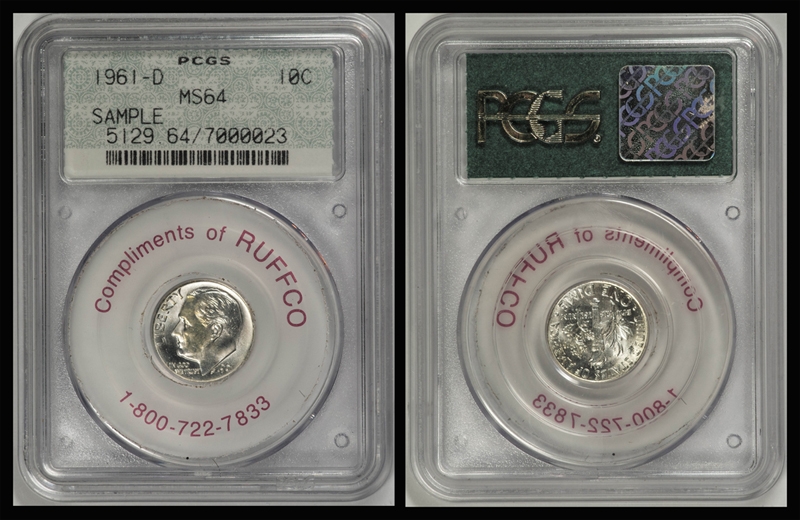 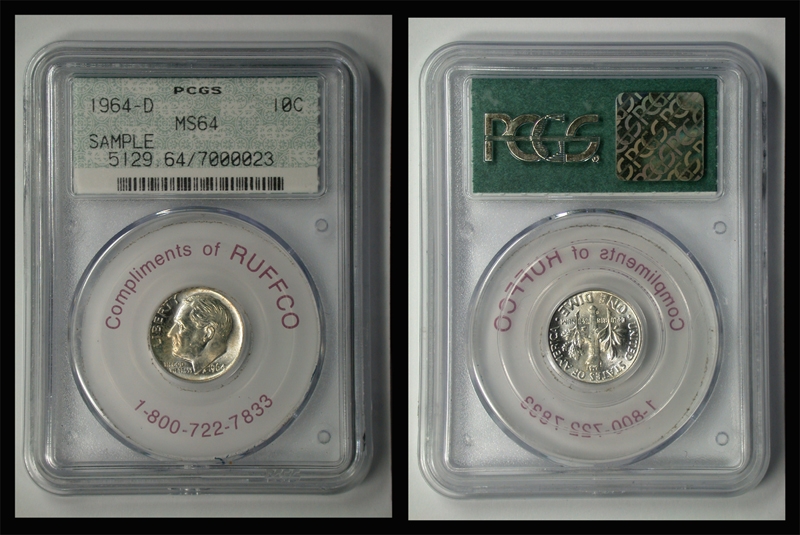 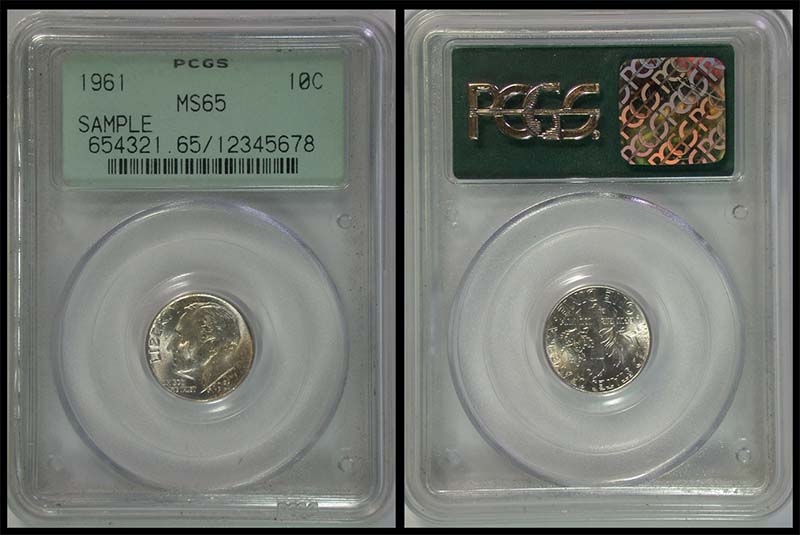 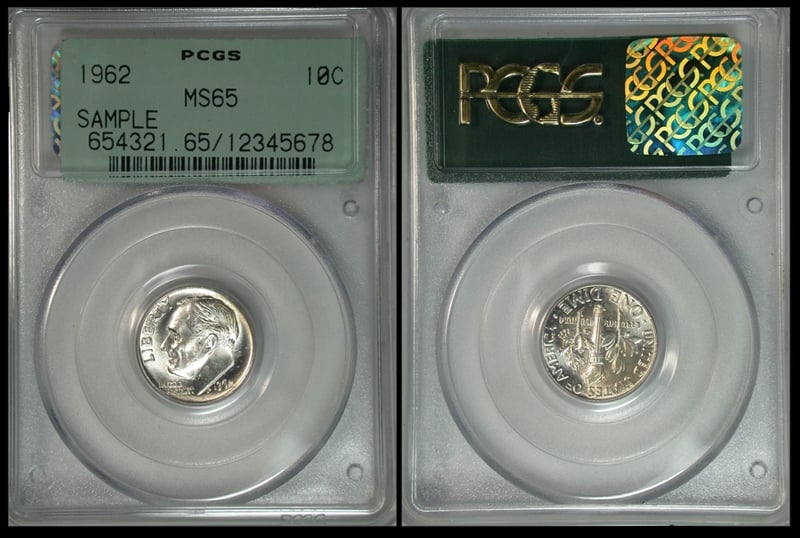 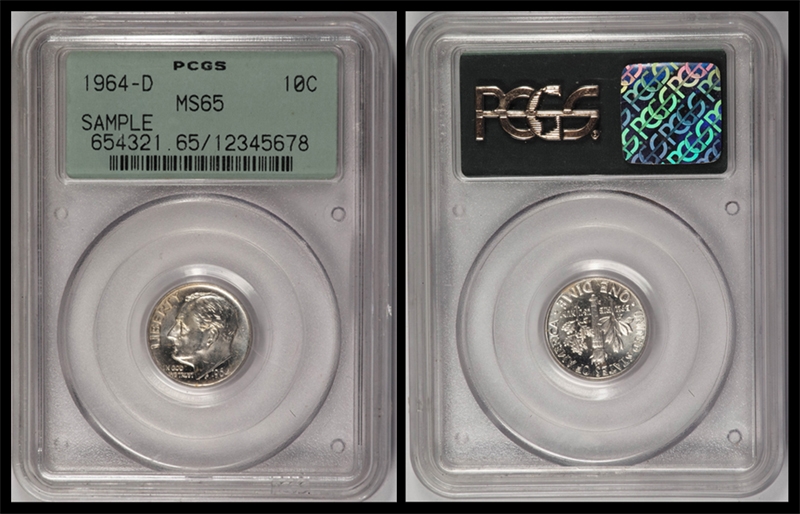 Sample 3.5.1 This sample generation follows the general 3.5 generation style with PCGS 2 piece holder, numbers left of the bar code and PCGS at the top. It's not clear to me which of the samples in this generation came first. Help would be appreciated so these can be put in order! This one has both a nonsense coin number and serial number but the grade following the coin number is correct. Cameron when developing SampleSlabs.com mentions that this label w/o serations "shouldn't exist" but probably confused it with the generation 2.0 sample rather than recognizing it as following the generation 3.5 style. All 3.5's that I've seen (regular or sample) have this style label. Dates seen include 1961-D, 1962-P, 1963-D, 1964-D and a 1964-D dime with the label date 1961-D, a rare early sample error. Another error is the 1st picture above, 1961-P label, 1961-D coin.
MS65 - 60, 61(61-D), 61-D, 61-D(64-D), 62, 63-D, 64-D.

It's interesting that there are no known generation 2.5 style samples. Given the style of numbering of the coin/serial number on this generation, it's possible that these could have actually been generation 2.5 samples. If you have first hand info of when these were issued, please let me know. 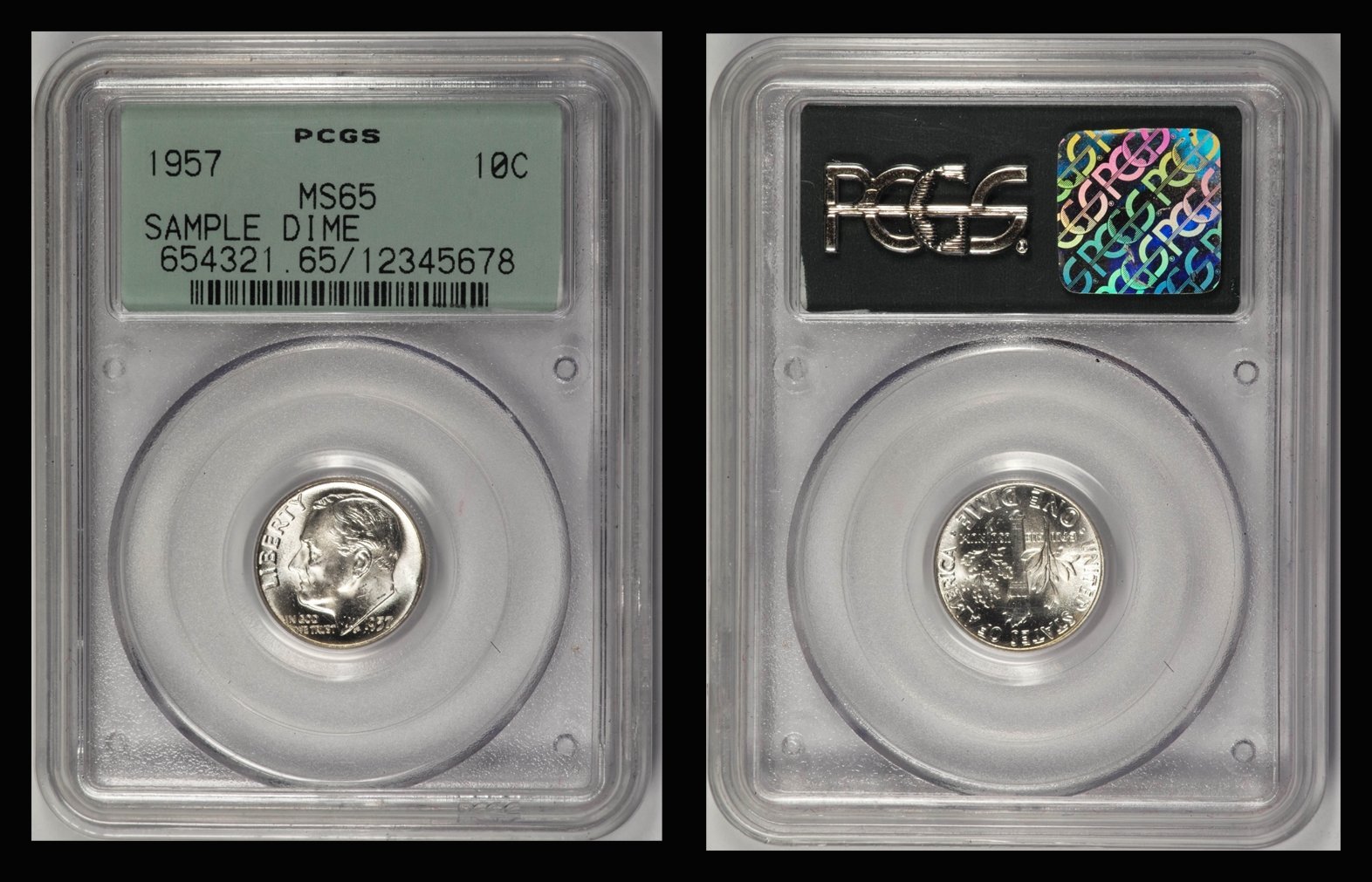 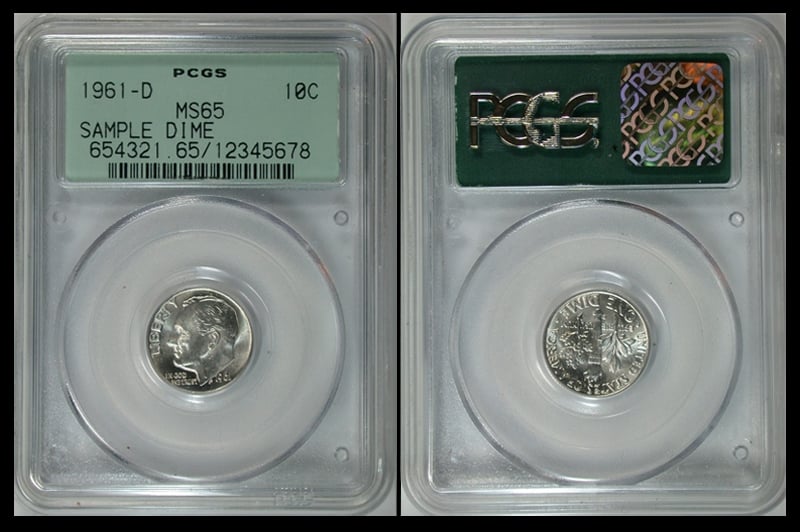 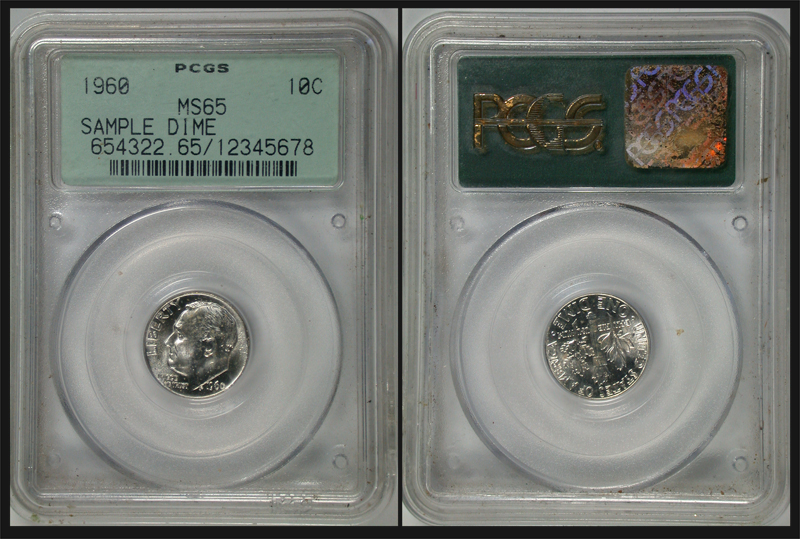 "My friends who see my collection sometimes ask what something costs. I tell them and they are in awe at my stupidity." (Baccaruda, 12/03).
I find it hard to believe that he (Trump) rushed to some hotel to meet girls of loose morals, although ours are undoubtedly the best in the world. (Putin 1/17)
Gone but not forgotten. IGWT, Speedy, Bear, BigE, HokieFore, John Burns, Russ, TahoeDale, Dahlonega
2