Many here know I have been smitten with this medal from the very first time I saw it shown here by member SCD Hunter.
I think it must be 8-10 years now. Since then I have tried to find out the real story behind this medal. Little by little each year I've been able to buy several original boxes and original Medals. I have found that there are several knock off's of this
fantasy 1915 Pan Pac Coco-Cola Bottlers Convention Medal. Some are close copies others are just awful and easily spotted as a fake. Up until recent the only information I had was a very short description by Jankovsky stating this was issued for the 59th Anniversary of the 1915 Coke Convention. Since then I've never found any other information other that what I saw in CoinWorld
(I think)....They had a image of celled bookmark by Whitehead & Hoag in 1906. I think they got it right for the reverse.
.
see image below.
.
. 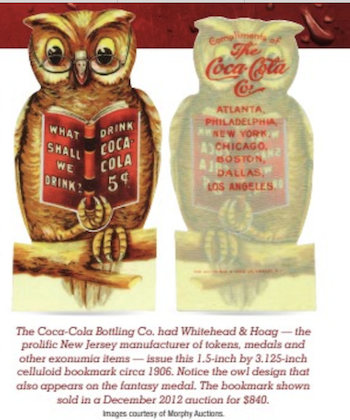 .
Let's go forward several years.......I was so very happy to find one for sale on Ebay in a NGC slab designated Jankovsky-740 Brass Facsimile Coca Cola Bottling Slug SC$50. So I sent one of mine in to PCGS and they slabbed and trueviewed it. Now I have 2 graded ones 4 or 5 original boxes and one really large box I bought empty with the exact same gold lettering on it. I though, well
I'll eventually find out what goes in there and have to box ready.
.
Several more years pass by until recently I always watch a seller on Ebay tamsguy67 as he has some super interesting items all the time and his descriptions are pretty thorough.
I saw he had Circa 1965, Coca Cola Bottlers Convention Medal, San Francisco,1915 Concoction. For sale and what he wrote on the description was very intresting
.
I emailed back and forth with him asking many questions and he was very helpful. I also asked if I could post it here with mentioning him and sharing our emails back and forth and he said okay.
Below is the auctions description.
.
In about 1965 the first of these Coca Cola Bottlers Convention medals appeared in the marketplace. They were made in England for an American who had an antique business in Long Beach, California. He could not have them made in the U.S. because of Trademark laws. The medals were good quality, well struck, golden brass, and were sold in special small red boxes also made for him in England, inscribed "Drink Bottled Coca-Cola, Delicious and refreshing, Convention 1915 USA". The cost to have them made in England was substantial, so he had to sell them at a high price, and my recollection is about $25 to $50, wholesale and retail. They were such a popular item, because they were a previously unknown Coca Cola collectable, and with the Worlds Fair connection, that they were quickly sold out. Another enterprising individual who had an antique store in, I believe, Manhattan Beach, California, discovered that such metal items could be made in Taiwan for far less than in England, so he ordered them to be made by the thousands, and he sold them for about $5 each, but no red boxes. However, the ones he had made were not the quality of England either, so they looked like dull low quality brass, a poor strike, and color, and have a dirty, look and feel to them. It is easy to see the difference if you hold both in hand and compare them. This medal that I am selling is the first England strike in the red inscribed box. It was made in 1965 as I said before, and had a limited number made, whereas the knock-offs were made from about 1972 to1990 in Taiwan by the thousands. My medal is golden brass, well struck, and choice uncirculated condition. Don't let anybody tell you that there is only one type of this medal made, these are the real facts about the origin of the two different coca cola medals. By the way, I know the names of the two antique dealers but I can't reveal them at this time, one is deceased and the other is very much alive and well. I am telling this story so that the facts can become known for posterity.
.
So naturally my question to him was:

Hi,
I have always liked these medals for years and have a few of the coke medals. I did read that these were made in 1965 as you say in your auction. However I never knew they were made in England.
Would you know who the die engraver and or company that struck these? Also would you know the mintage? Lastly, where did you find out information
on these medals.
Thanks for any info you can give ,me.
.
.
His Reply:
I never asked the manufacturer of the medals or the engraver, nor the mintage, sorry. However I knew both parties well, we would visit at coin shows back in the sixties and seventies, and they revealed the story behind the making of the medals. I might add, the creator of the medals, later made fantasy Wells Fargo belt buckles, Coca Cola belt buckles supposedly by Tiffany, and loads of other fantasy western items. You are probably familiar with the Tiffany Coca Cola belt buckles. He even went so far as to write to Tiffany & Co. asking if they were actually made by them, (even though he himself made them), and received a letter back saying that their records were destroyed in a fire, and they acknowledged it was probably their product. He then published a book on the belt buckles showing the letter from Tiffany, and used it to prove that they were authentic. He was a sharp businessman. TE
.
Of course I had more and more questions......lol, but won't post everything and get to the point.
Here was another reply.
.
.
Stephanie -- I will do my best to answer your questions. Obviously, Jankovsky was wrong about the 50th Anniversary of Coca Cola in 1965, as Coke was invented in 1886, and there is a 1936 50th anniversary token listed in the Pettreti book on Coca Cola collectibles, however I never heard that a celluloid bookmark was copied to make the reverse of the medal. Yes, you may use my listing and emails as information for collectors, if you like, I think it is a good idea to get the information available out there, so at least some future collectors will not get cheated. Your coca cola box you mentioned, if it is red, large, and rectangular, with gold lettering, it was made by the originator of the coca cola medals also, and it held the rectangular Tiffany belt buckle, the well made die struck one, not the cheaply made Taiwan cast metal copies. As for the 1915 date, the 1915 connection to the Worlds Fair in S.F. was to appeal to World Fair Collectors as well as Coke collectors, a larger market for the medals. Thank you for your interest. Regards, TE
.
.
Of course now I knew what the extra large Coke box was for but, which one? Several back and forth and he gave me an auction number and I bought it. So now I have a greater understanding but, really wished I knew who the dealer was that ordered these.
He did say he know but prefers not to say. Also, I know now these were made in England along with the belt buckles and Coca Cola Boxes.
.
Below I have various pictures showing the two boxes next to each other so you can get a feel for the size.
And a few very important points I haven't even discussed with the Ebay sales guy tamsguy67. The various knockoffs are fairly simple to figure out.
A few key pick up points:
1) The better knockoff's have die polish lines on the reverse where it says BOTTLING.
2) They also way 38.2g where the real one weighs 39.3
3) The reeding and overall strike on the medal is far superior
4) This is the biggest pickup point and just saw it tonight as I was writing this up for everyone. The reverse has the owl
perched on a branch...... on that branch has two initials C.C. Actually can't believe I never saw this till tonight.
Not sure if this is the engravers initials or does it stand for Coca Cola?
.
If I find out any more information or someone can add to what I have please don't hesitate to post!
.
.
I'll post my trueview of the medal in case some here don't know what I'm talking about.
.
.

This is a quick side by side pics of another two other medals I own. One fake, one real.
The fake is on the left and very brassy looking with soft strike and just yucky details.
I don't have an image of the countless terrible knockoffs, these are very apparent.
.
In the pic I show with red arrows the die polish lines and C.C. initials
.
. 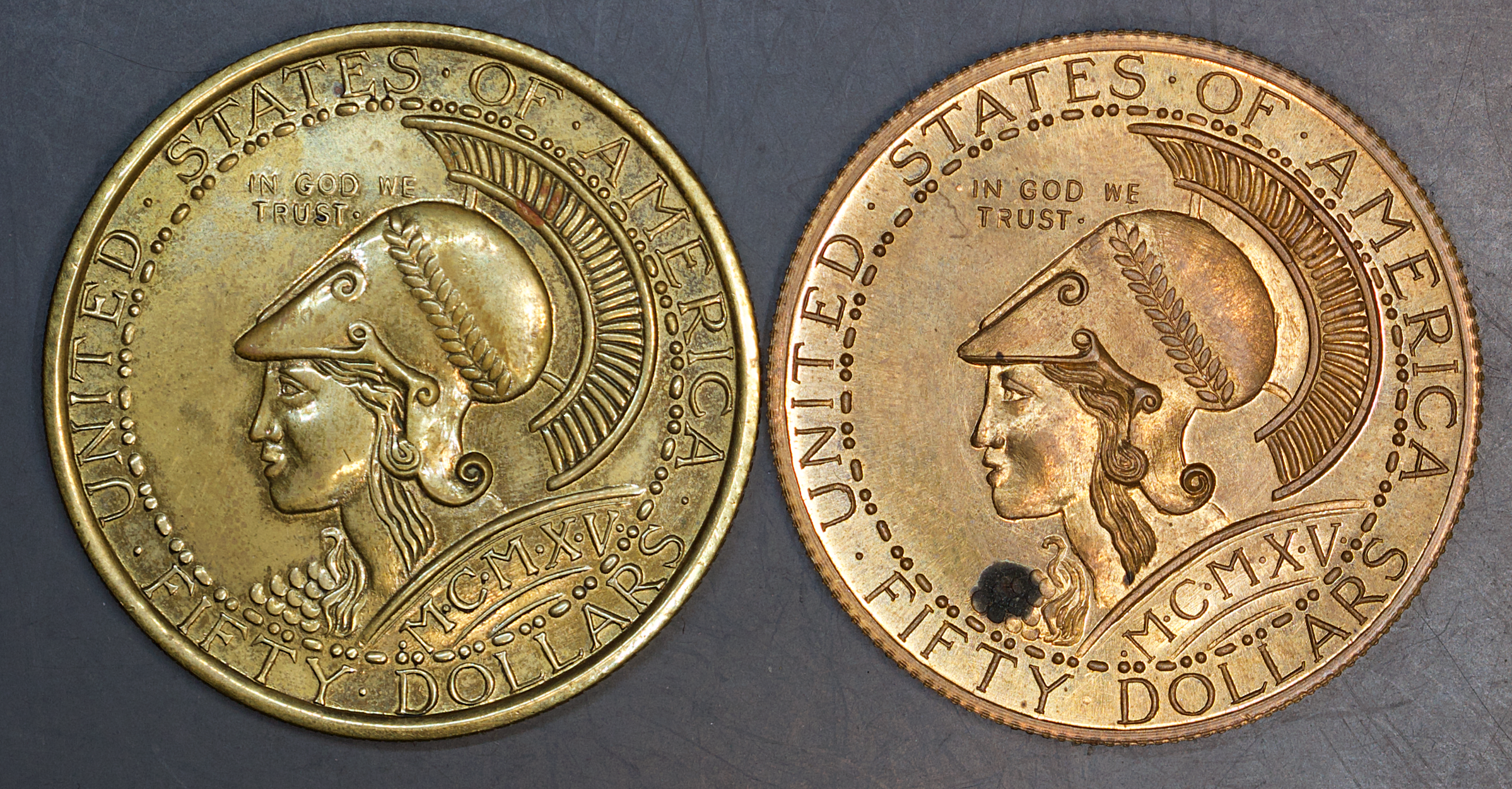 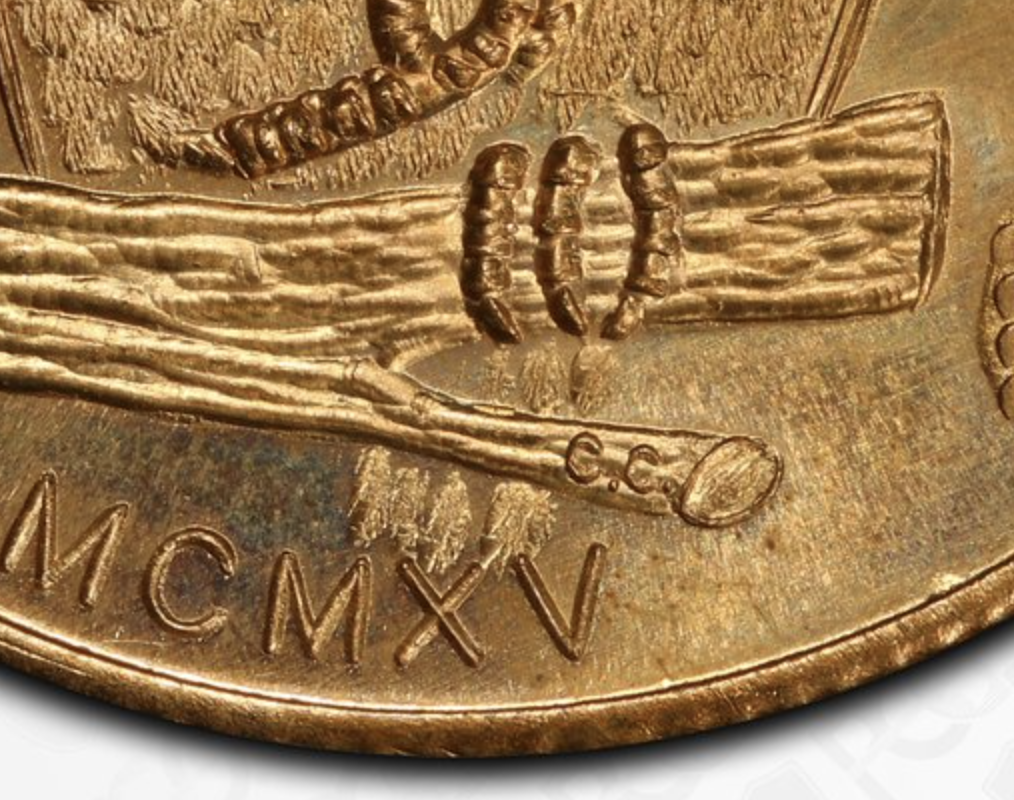 .
.
.
This is the belt buckle that was in the larger Coca-Cola box. There are really nasty cheap knock off's of these too but this is the one that was made for the larger box together with the 1915 Pan Pac Coca Cola Slug.
.
. 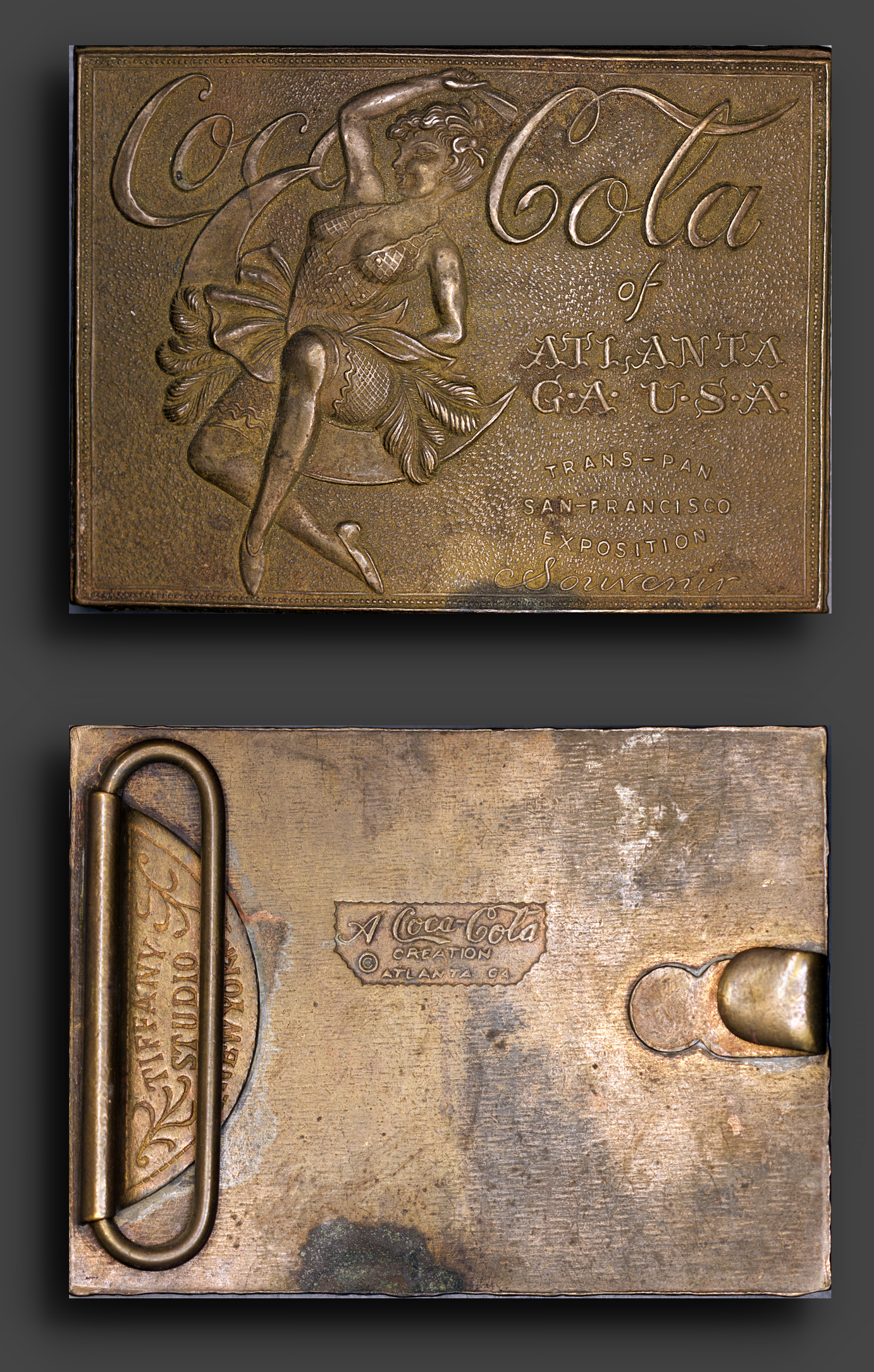 .
.
.
Below are some pics showing the boxes with the medal and buckle inside. Shame my real medal developed the back spot.
I even had it in a PCGS flip ready to send in 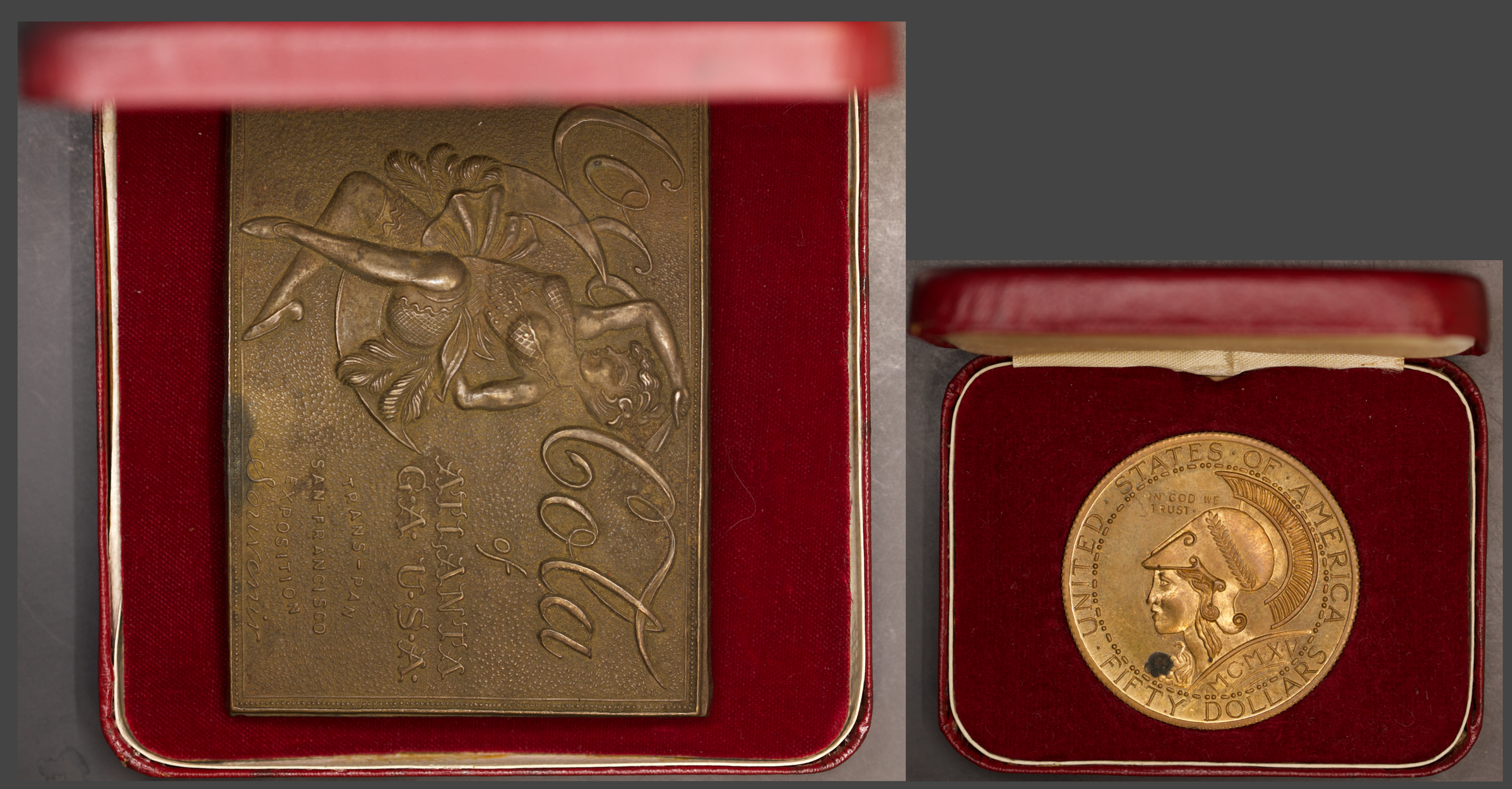 .
.
.
.
I thank anyone who reads this and can appreciate this medal. Maybe one days I will find out the mintage and maker.
I do believe as I always did that there are not that many out there as the seller on Ebay confirmed it but........thousands of
knockoffs.