For a second entry on key coins following my post on the 1840 La Rioja Rebel Peso, I thought I would focus on the Coquimbo Peso. No better write up could be done that to simply copy Carlos Jara's summary of his book on Coquimbo.

At present there are 13-15 examples of the Fine type (depending on duplicates in the census dating back to cataloging prior to imaging eg. the Peltzer piece and the Ulex piece).

Here is my piece, ex. @MrEureka, which was discovered in the collection of a British man, who's other pieces were unremarkable. It was brought to the Antiques Roadshow and brought to the national stage via a DNW sale. 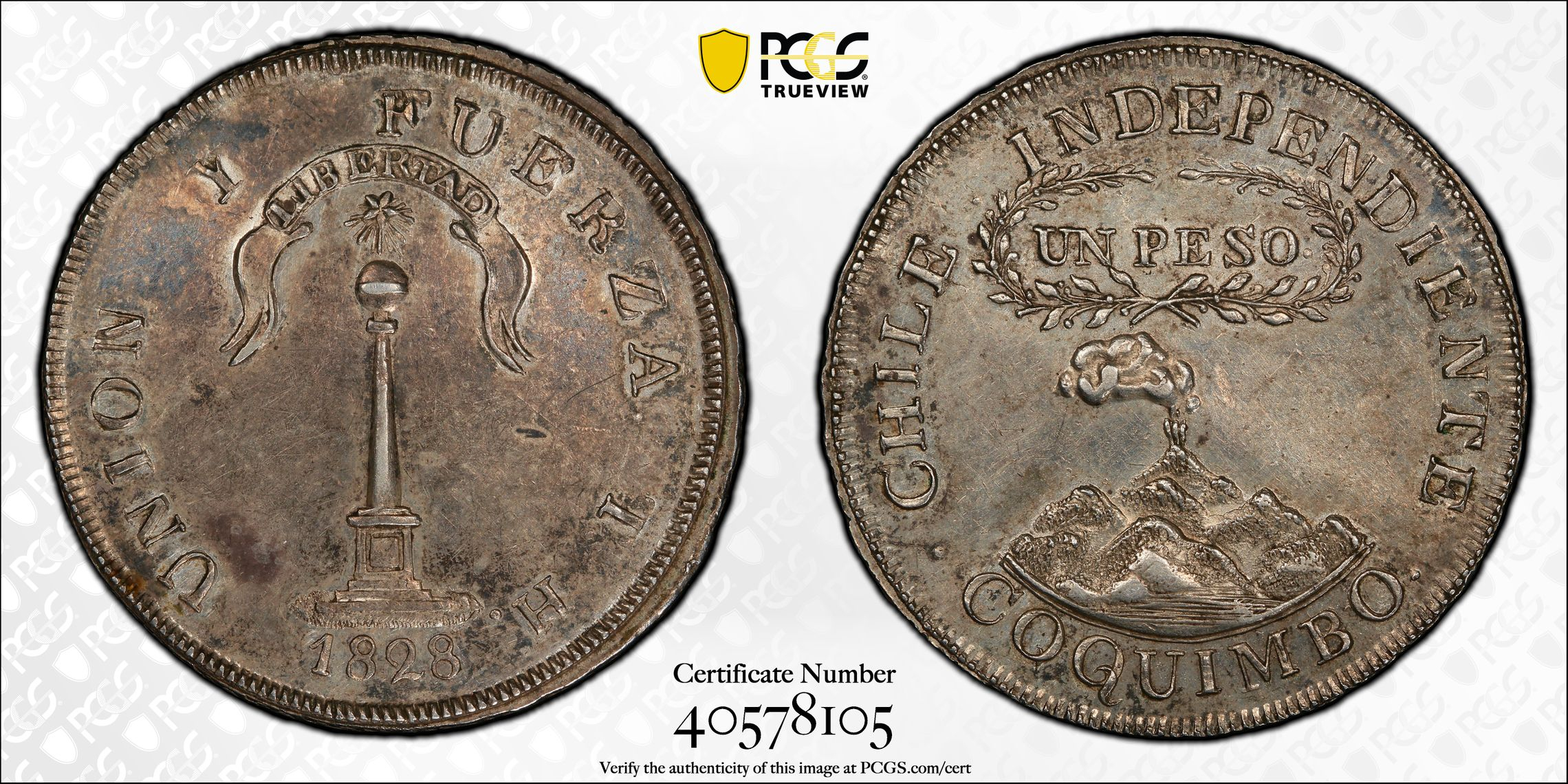 A detailed history of the short-lived mint of Coquimbo
(Northern Chile) can be found in Jara & Luedeking: Chile’s
Coquimbo Mint: a documented history (2003), and a short
summary follows:

Due to the distance between the Santiago Mint and
the silver and gold Mines in the area of Coquimbo (around
300 miles), a local Mint in Coquimbo seemed to be a good
idea. By government decree in September 1827, such a mint
was authorized and the project was put under supervision ofGregorio Cordovez, who in turn enrolled Theodor (or Teodoro,
as written in the contemporary documentation in Spanish)
Hagen as his handyman: Hagen worked as both engraver and
assayer his initials are shown in
the presently known examples
of the Coquimbo Mint’s issues.
While, the Santiago mint
was instructed to send “all
the equipment necessary for
the proper functioning of the
Coquimbo Mint”, such was not
entirely the case: in particular,
no dies, hubs or punches were
sent, and so Hagen had to
hand engrave the blank dies he
acquired from a local English
mining company for his initial
trial strikes.

Records show that the
first 20 samples of 1 Peso coins
struck in Coquimbo were sent
to Santiago on June 23, 1828:
these 20 coins were presumably
the best ones (as should be
expected from a new mint
seeking approval) from an initial
batch of around 200 coins. Of this initial sample, 6 coins were
destroyed for assay purposes while the remaining 14 were
returned to Coquimbo. These samples were rejected on the
basis of their lower than expected fineness and defective
engraving (Medina refers to this initial batch of 20 coins in
his work “Las Monedas Chilenas”, but many numismatists
misinterpreted him concluding that only 20 Coquimbo Peso
coins had been minted, which was clearly not the case!).
On November 18 of 1828, a second batch of
samples of 1 Peso, 4 Reales (currently unknown) and ½ Reales (two of which are now known) were sent to Santiago.
While an improvement over the specimens from the sample
sent on June 23, the coins were nevertheless rejected in
Santiago: the flans were described as “poorly prepared and
discolored”, the dies as “badly made”, the edges as “not
properly wreathed”, the coins as “not well struck”, and the
fineness as “slightly too low”.

By late 1829, a proper screw press had finally been
installed at the Coquimbo Mint, while Hagen had been able
to finish dies made from hubs and punches (as opposed
to hand engraved ones). At that time, the Coquimbo Mint
would have been able to produce coinage of a high standard
but the Revolution of 1829-30 cut all plans short (most of
the Coquimbo Mint’s employees were forced to flee) and
the whole project was cancelled by force majeure.
Two different types of the Coquimbo Peso are
currently known: a crude type (pictured in both editions of
Elizondo), with hand engraved dies, and a finer type, from
much finer dies made using hubs and punches: the present
specimen is from this later finer type.

While a number of modern authorities had dismissed
the cruder type as modern forgeries, the documentary
evidence in their favor is overwhelming: their characteristics
are an almost perfect match for the description by the officers
of the Santiago Mint of the coins from the batch sent to
Santiago on November 1828. As stated in Leu Numismatik’s
catalog 89 (October 21st, 2003, description of lot 440), the
trial issues of (November) 1828 were rejected precisely for
those very same faults that the modern commentators used
in their rationale in proving the coins false!

The finer type was made in late 1829, and
corresponds to the presently offered specimen: as usual for
this type, the flan is well made and has excellent surfaces,
the dies are as well made as any produced in Santiago, the
edging is fully correct, the coins are sharply struck and of
proper fineness. As mentioned previously, and quoting
the aforementioned Leu Numismatik catalog # 89, “shortly
after these beautiful coins were struck civil disturbances
erupted, which both precluded the chance of sending this
third issue of trials to Santiago (where they would have most
probably been accepted) and resulted in the looting of all
the bullion and trial strikes then in the Coquimbo mint. All
known examples of the ‘crude and fine types’ (= the second
and third issues) must have left the Coquimbo mint during
this period of disturbances (some may even have been kept
as keepsakes by Cordovez and Hagen themselves), with the
strong probability that most of the pieces then existing were
melted down.”