Just ran across this gorgeous specimen on Stack's. This is the Dr. Herbert Ketterman specimen.

Nearly 70 years ago in 1948, Abe Kosoff called this coin "probably the finest in existence," a claim that has stood the test of time and has been substantiated by the MS-65 grade assigned by NGC. We can confidently say that no known example can contest this spectacular Gem with blazing luster and an exceptionally sharp strike on both sides. The color is rich and deep, an even dark yellow that glows with remarkable radiance truly unlike any territorial we have seen. The surfaces are reflective and flashy, complementing a bold strike from rims to center. The fields are immaculate, showing no nicks, just a scattering of hairlines under a glass. A very tiny rim nick is hidden in the denticles just above 9 o'clock on the obverse and a tiny spot at the eagle's throat allows us to definitively plate match this to the 1948 "Memorable" plate. The visual appeal is simply extraordinary.

A bit of background on the Miner's Bank:

The firm of Wright & Co., exchange brokers, was located at the corner of Washington and Kearny streets, Portsmouth Square, San Francisco, early in September 1849. On August 7 the firm requested permission from local authorities to coin $5 and $10 gold coins, declaring they would be worth as much as Federal issues. Authorization was not granted. In November, Wright & Co. reorganized. Composing the new company were Stephen A. Wright, John Thompson, Samuel W. Haight, and J.C.L. Wadsworth. Known as the Miners' Bank (or Miners/Miner's-punctuation varied), the outfit was housed in a wooden frame structure for which the incredible sum of $75,000 rent per year was paid. It is believed that the $10 coins were produced in the autumn, apparently before the November 1849 reorganization was completed, for William P. Hoit, assayer of the New Orleans Mint, reported on December 13, 1849, that he had assayed a Miners' Bank $10 nearly two months earlier, and that he had found it to be worth only $9.65. Alta California reported this on April 11, 1850: "The issue of the Miners' Bank is a drug on the market. Brokers refuse to touch it at less than 20 percent discount.…" On December 14, 1850, the Miners Bank dissolved. As the Miners Bank $10 pieces no longer circulated at par, the pieces in the hands of the public went to bullion dealers at a discount and were melted. Within a few years they were rare.

Of note, while this is a NGC MS65 now, this used to be a NGC MS63 in this article by Neil S. Berman: 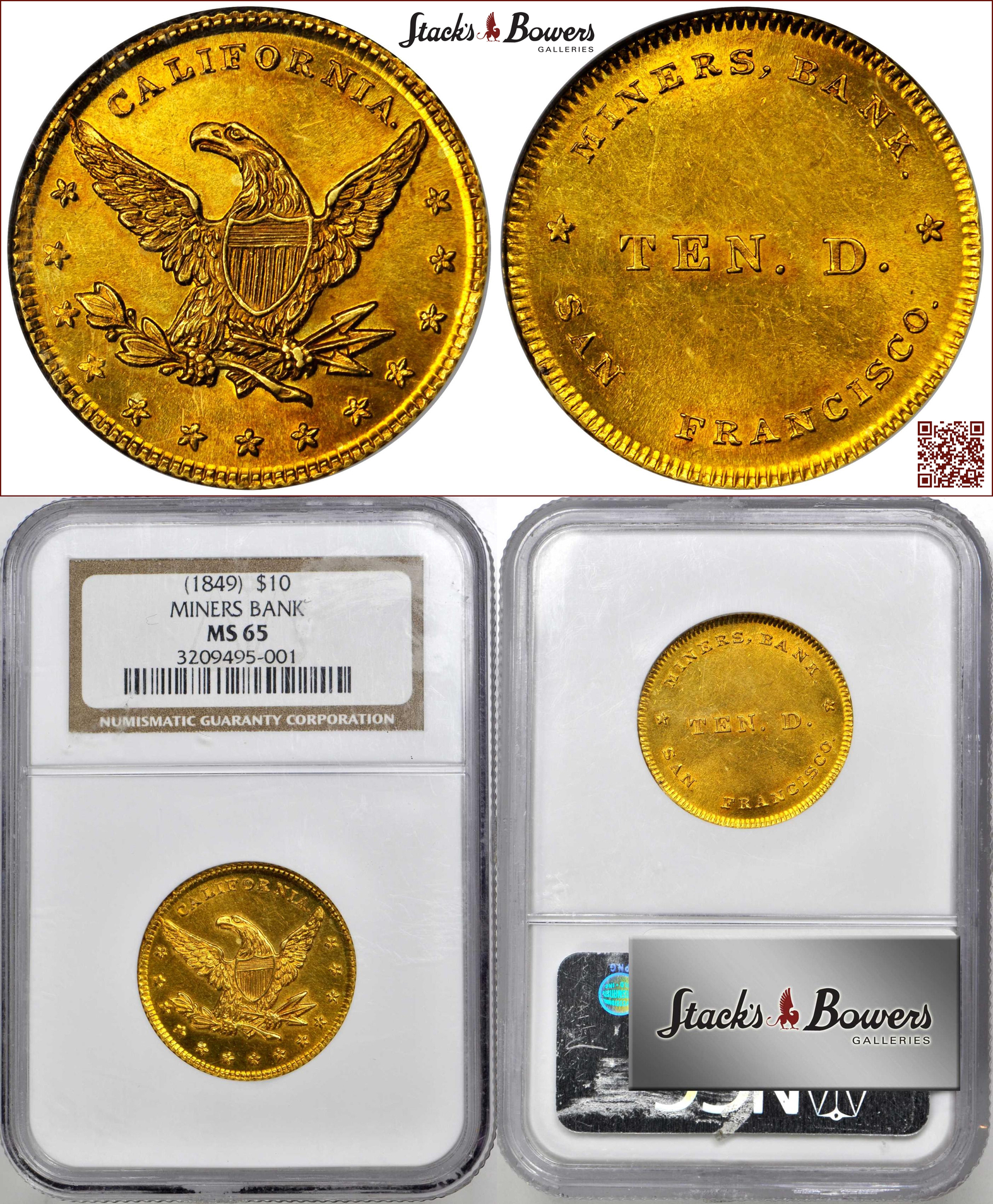