Not That Joe but Johannes V, King of Portugal and Brazil.

Two large gold coins were minted in Brazil after gold discoveries in that country which corresponded in size to the Spanish doubloon and half doubloon.
The 12,800 reis coin was known as the "full joe" and the 6,400 reis coin as the "half joe", named after the king.
The simpler name "joe" was also applied to these coins, usually the half joe, along with the peca.

They were known in the American colonies and were mentioned in almanacs of the period and US Continental Congress foreign coin valuations, and were also a favorite of pirates.

The large full joes were rarely seen because they were minted for only a few years.

These large coins were called "Dobras", made in Brazil from 1727 to 1733, and had a value close to the Spanish eight Escudo coin or "Doubloon".

This one was minted in the mining town of Vila Rica (Rich Village), now known as Ouro Preto (Black Gold), in the state of Minas Gerais (General Mines) which was the gold mining region north of Rio de Janeiro. The Vila Rica mint operated only from 1724 to 1734.

The large coins were made to keep up with the gold being produced in the Brazilian mining area Likewise, the United States started making twenty-dollar gold coins in 1849 to handle the gold produced in California. 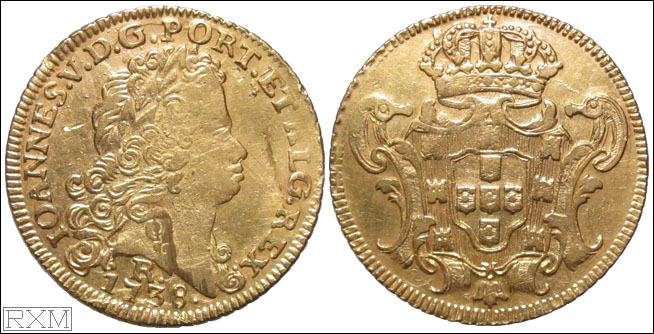 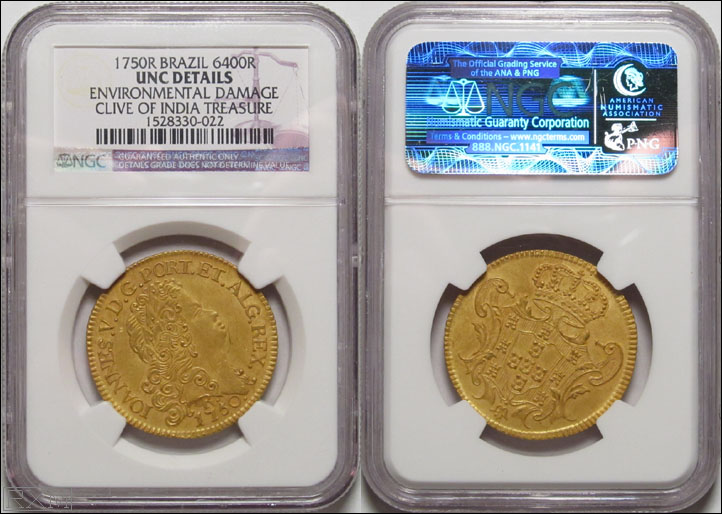 Robert Clive (1725-1774), "Clive Of India", was a British officer credited with establishing the Great Britain rule of India.

After his successful military, diplomatic and economic ventures on behalf of the Crown in India, Clive returned to London.

In 1755, he had to travel to India and sent his money, around £3000, ahead, in the form of Portuguese gold Peca coins, an international currency at the time.

The money was put on the "Doddington", and Clive left on another slower ship. The ships left England in April 1755, and near South Africa, the Doddington managed to wreck on the Chaos Islands of Algoa Bay, now known as Bird Island.

A few crew members survived, and after several months, were able to build a boat, sail to Mozambique, and be rescued.

In 1977, professional treasure hunter divers found the wreck and the gold, and claimed it had been found on a ship in international waters, possibly a pirate ship.

The South African government claimed that the gold came from the Doddington, located in their waters, and after years of legal action, South Africa got 1/3 of the treasure, and the finders got the rest.

The coin that I have is dated 1750, minted in Rio de Janeiro, and graded by NGC (Numismatic Guaranty Corporation) as "1750R Brazil 6400R / UNC Details / Environmental Damage / Clive of India Treasure"

In 1774 Clive was offered the command of all British forces in North America, but he declined the offer and then killed himself either with a penknife or opium.

I do not own many slabbed coins but this one tells a story along with the grade. 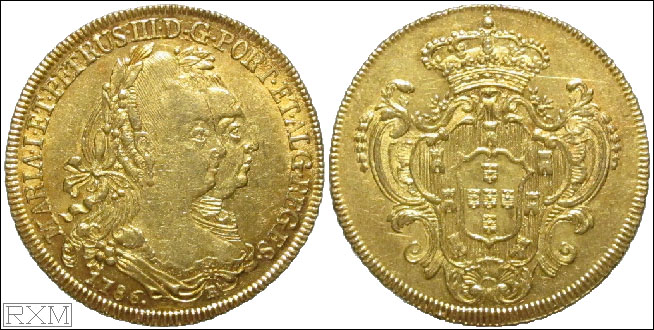 Maria I is on the coin with her husband and uncle Peter III.