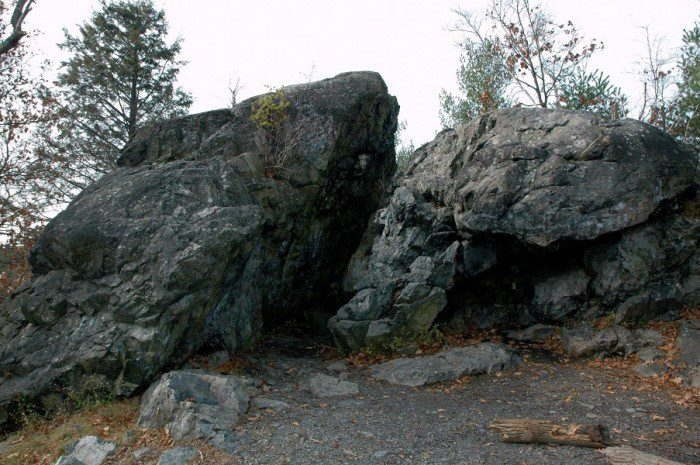 In 1658, pirate Thomas Veale supposedly buried several chests of gold and silver coins near or inside the cave. Stories say that Veale lived within the cave until an earthquake struck and took his life. In 1852, a man named Hiram Marble bought the cave and built a house and outbuildings on the spot. He moved his wife and son to the area and then excavated a new cave to find the treasure. Marble believed he was receiving directions to the treasure from the ghost of Thomas Veale himself. If you're interested in checking out the place for yourself, the iron gate leading into the cave is open for a few hours a day or by request to the Lynn Woods Reservation

Late in the summer of 1658, a sinister ship appeared in Lynn Harbor. The ship was painted black and flew no flag. Word spread quickly among the citizens of the small town of Lynn, Massachusetts: There were pirates in the harbor! A boat was lowered from the ship, a chest was loaded into the boat, and four oarsmen rowed it toward shore. The boat headed up the Saugus River and landed near the Saugus Iron Works. The next day, workers found a note attached to a door, asking to purchase a supply of shackles, hatchets, shovels, and other tools. The note promised that if the requested tools were manufactured and left at a secret location, then a supply of silver would be left in exchange. The tools were made and paid for as promised.

The pirates made camp in a place now known as Pirate's Glen near the Saugus River. British soldiers stationed nearby heard about the pirates and set off to capture them. Three of the buccaneers were captured and hung but the forth, Thomas Veal, escaped into the woods. It was believed that he took the stolen hoard with him as he headed deeper and deeper into the woods. finally arriving at a natural cave in what is now Lynn Woods. Veal lived in the cave for some time and became a member of the Lynn community. The story says he mended shoes for spending money and lived in relative peace with his neighbors. Suddenly, an earthquake rocked the Lynn area, causing a gigantic piece of the rock to tip forward and permanently seal the cave opening. Poor Veal was either trapped inside or crushed to death with his treasure, locked forever in Dungeon Rock.

The remains of Thomas Veal and his treasure were left undisturbed for nearly two hundred years. In the 1830s, two attempts were made to recover the treasure by placing kegs of powder the cave opening and igniting them. Both attempts failed, and the opening to the cave was destroyed, but no riches were found.