I have a question for you autograph guys.

I have had a few of these Ryne Sandberg Red Lobster cards but this is th eonly one I have left. While not rare they are not easy to find in great condition due to the fact the set was given away at Wrigley and it was heavily shrink wrapped which caused many corner issues. As this is Sandberg's real rookie card I am in a bit of a conundrum.

Sandberg signs through the mail for ten bucks and I do know those autographs are real. He lives within an hour drive of me and he is around town signing autographs to getting a real one is not a worry. The question is SHOULD I have it signed or leave it as it is? I love the idea of signed rookie cards but I know these Red Lobsters in better condition have some collectability as well.

What are your thoughts?? 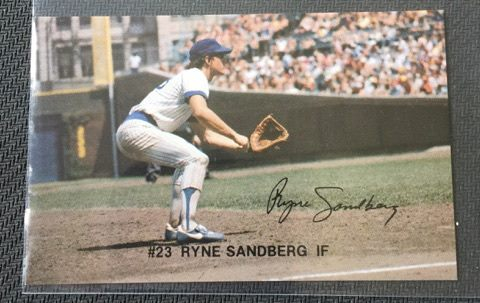