These three late medieval/early modern coins were all recently encapsulated. (So recently, in fact, that the 1596 thaler is still in transit back from PCGS as of this typing.) Unfortunately, they failed to straight-grade, but they still have plenty of eye appeal, as you can see. I will offer them for sale here. I'm pretty firm on the prices since they're priced at my cost, but if the ask prices don't work for you, offer me a reasonable swap. Offers of bigger World silver pieces or classic US Type coins (raw or slabbed) will be considered, as long as the offered coin(s) are decent looking and have quality high-resolution photos.

Also en route back from PCGS is one of those red-hot-popular "skully" tokens, which did straight-grade, at XF40. Since a lot of folks were clamoring over the last ones I sold, I'll likely list this one on eBay, so everyone will have a fair chance at it. There are more pictures of it here. (Be patient while that slow link loads.)

PayPal F&F is preferred for payment.

France (Metz, Free Imperial City): silver gros, civic issue, ca. 1406-1588
PCGS Genuine - VF Details (95 - Scratch).
PCGS cert page here.
Full writeup on CoinTalk here.
A handsome late-medieval hammered coin with attractive contrasting toning. I overlooked the hairlines on St. Stephen's robes. You can see them in the TrueView but hardly at all in the other images, which came from the seller. They're those faint kind of scratches that show at certain angles to the light, but are practically invisible from other directions. Check out the long, spidery-fingered manus dei (Hand of God) above the saint.
Asking $150, postpaid to US addresses. 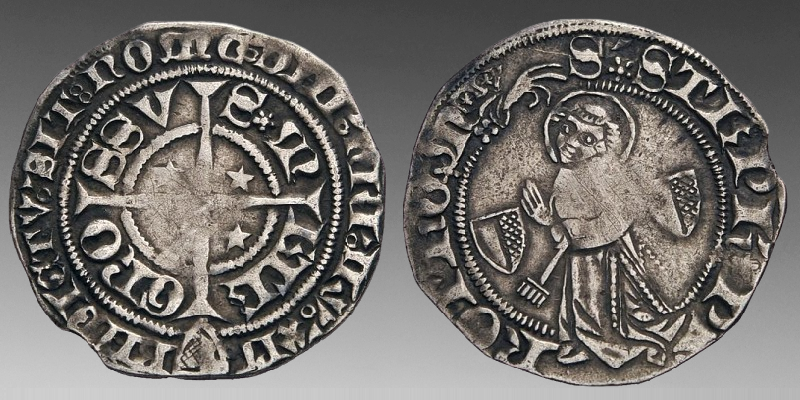 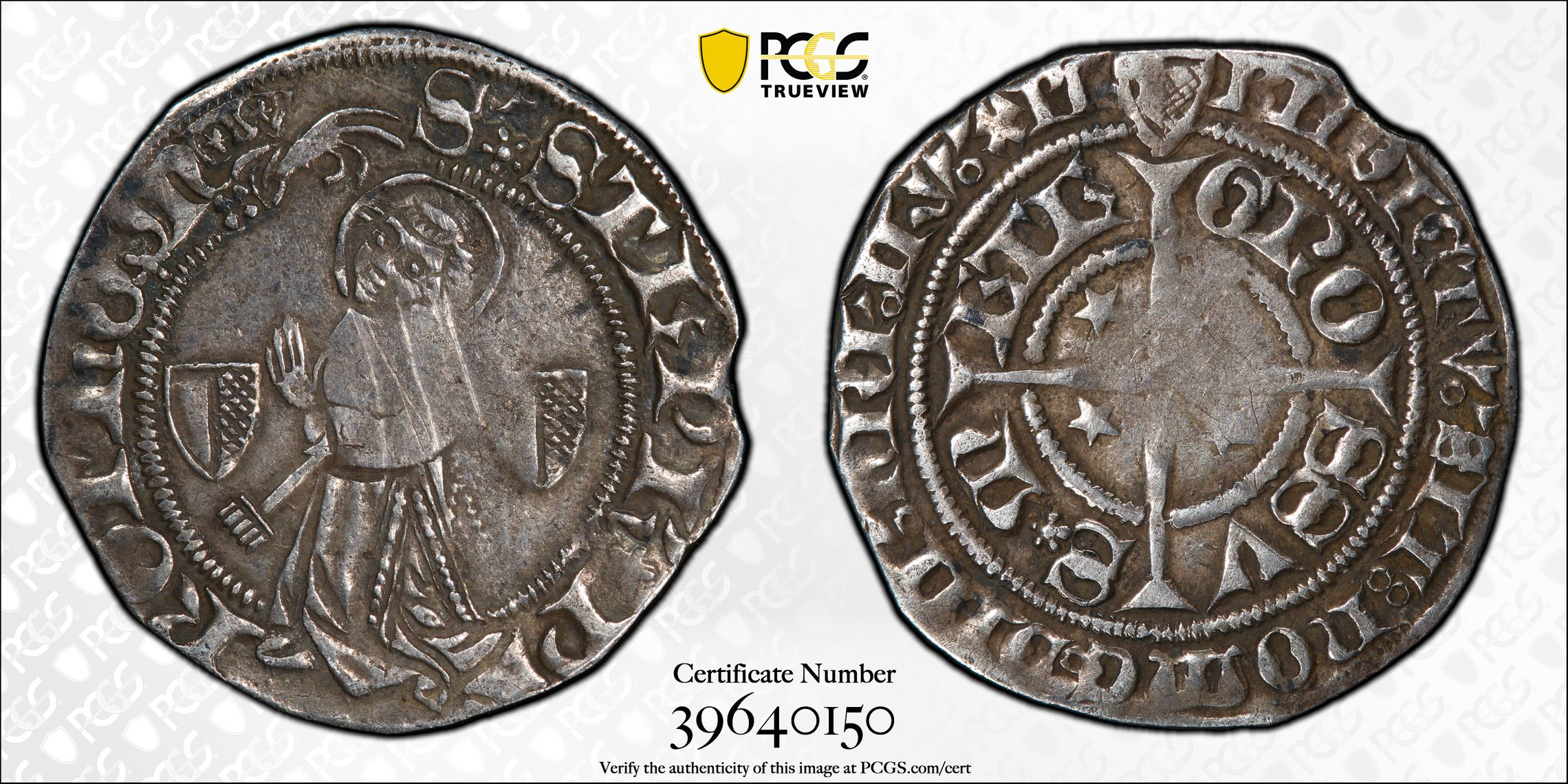 Belgium (Liège): silver ernestus of Ernest of Bavaria, 1582
PCGS Genuine - VF Details (97 - Environmental Damage).
PCGS cert page here.
CoinTalk discussion of the lot from which this piece came.
I don't really know much about this type. They're not exactly common. I thought it was neat looking, with its contrasting grey toning. Like some early-dated pieces from the 16th century, it has a two digit date: (15)82, with the "8-2" on opposite sides of the coat of arms on the obverse. This one failed to straight grade because of some light deposits and some faint greenish oxidation. That looks like PVC, but is natural (I've seen it on other 16th and 17th century silver from hoards). Had it actually been PVC, I suspect PCGS would have bodybagged the coin and not encapsulated it, but since it's natural, they ruled it "environmental". It is still a handsome, largish early-dated coin.
Asking $100, postpaid to US addresses. 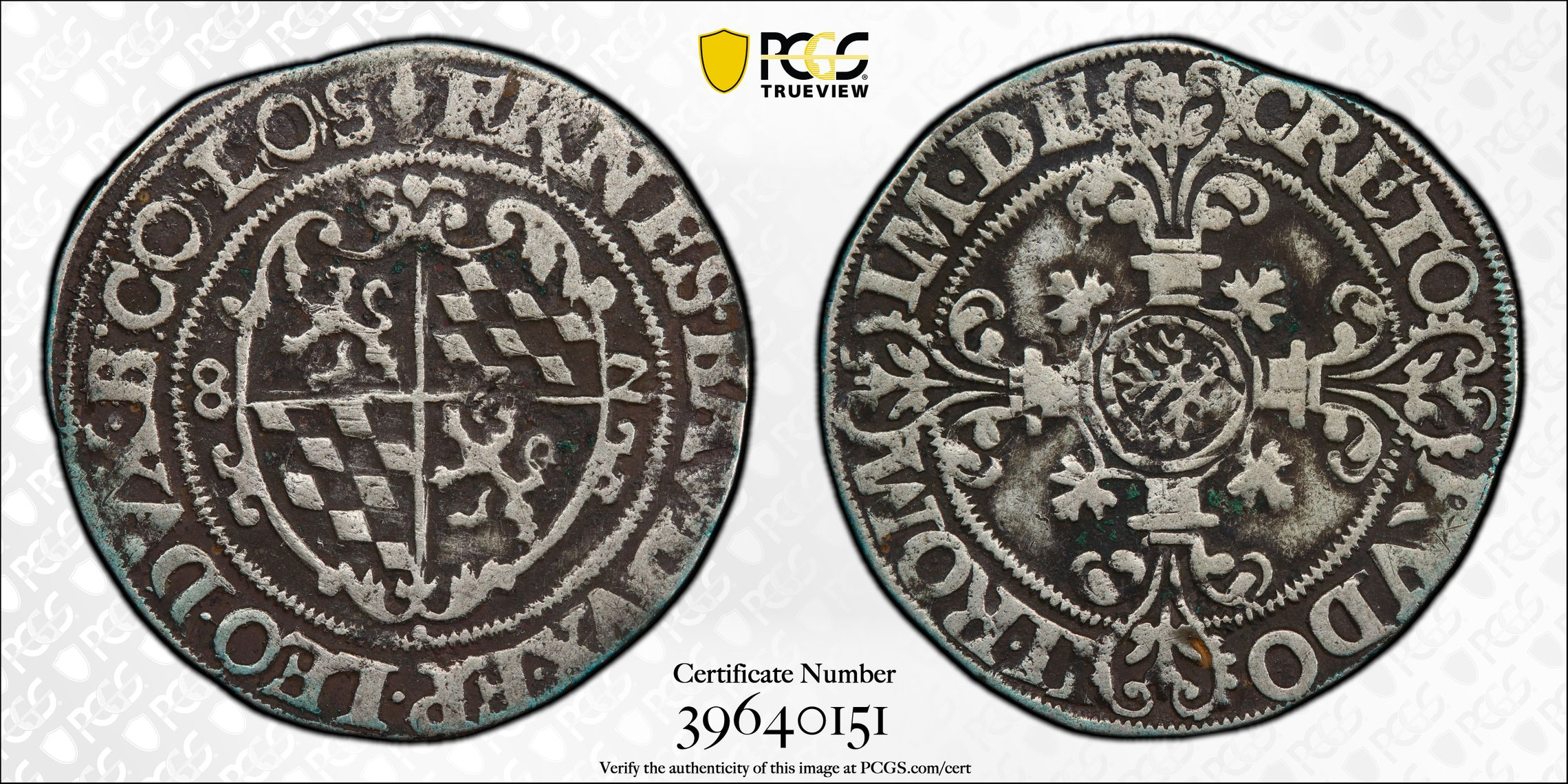 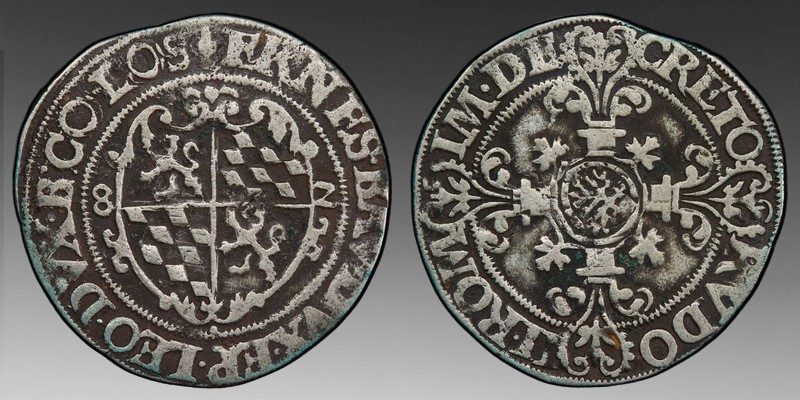 German States (Saxony): silver thaler, "3 Brothers" type, 1596-HB, Dresden mint
PCGS Genuine - VF Details (98 - Damage).
PCGS cert page here.
Full writeup on CoinTalk here.
Asking $340, postpaid to US addresses.
This is a handsome large silver coin, bigger than a silver dollar. It is in fact from "thaler" (or the German word taler) that the word "dollar" had its origin, as you probably know. This piece has some nice old cabinet toning with hints of color. Check out the spooky-looking trio of brothers in their ruffed collars. As of this typing, with the freshly-slabbed coin still in transit on its way back from PCGS, I have no clue where the "damage" is. I don't think it's the flat area on the reverse- that looks like fairly typical strike weakness. I suspect there must be traces of an old removed mount on the edge somewhere, maybe? That's a fairly common issue with thalers. It certainly doesn't affect the eye appeal in this particular case. I still think this is a handsome coin due to the attractive toning and the neat design. Plus, these big pieces of early silver are just so impressive in hand. Look how surprisingly similar the previous (seller's) images and the TrueView are. 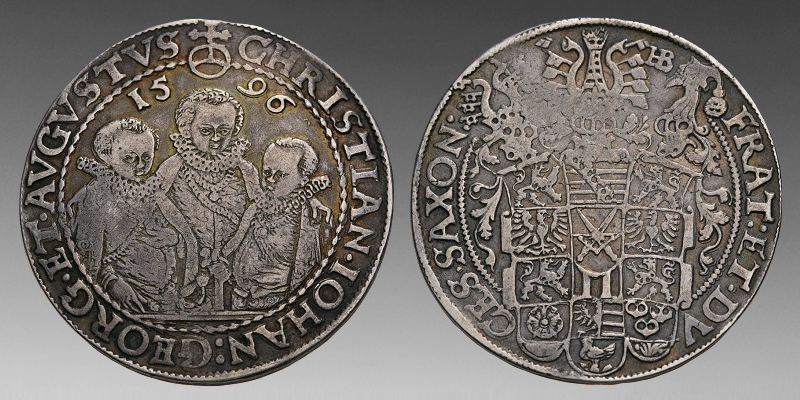 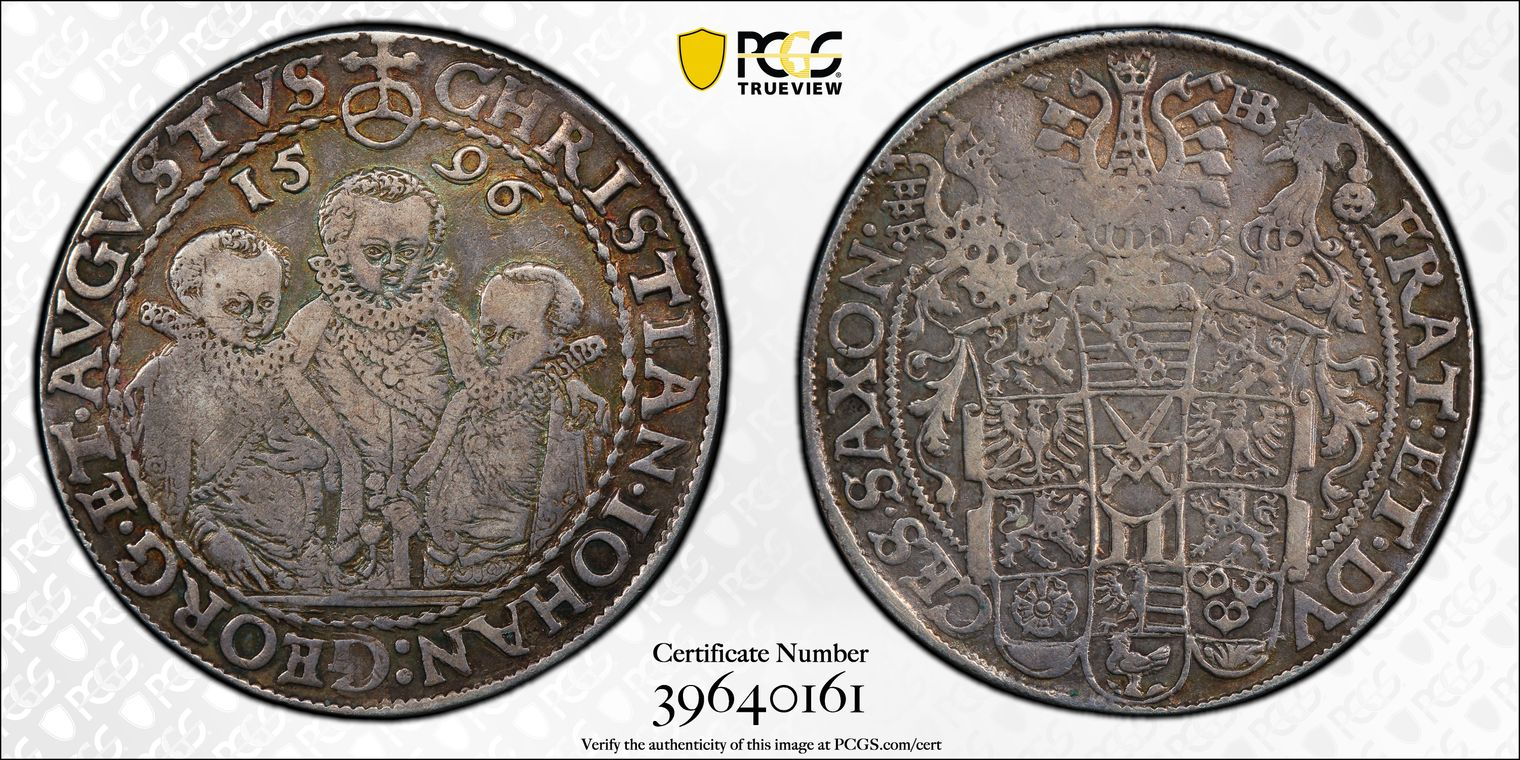