How do I make these legit

These were handed down to me through an uncle he was a big-time brave fan but there's no certification with them that I'm aware of but I know that these signatures are authentic how do I find out first of all whose signatures they are because they're hard to read and if for sure they are legit and how do I go about getting them legitimised![](https://us.v-cdn.net/6027503/uploads/editor/w0 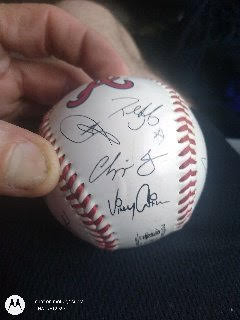