A 25 year hiatus ends - My introduction

As has always been customary for me on whatever forum I've joined over the years, I always find it proper to introduce myself to the community. Most times, said community doesn't really care one way or the other, BUT I come from an elder era where things were much different, "back then", as opposed to today. So with that being said, I wish to begin by saying, "Hello. My name is Manny", you know, like those silly stickers people wear sometimes. I'm from Massachusetts, a rabid Red Sox junky and just recently turned 52. It's been a very long time since I've collected and even payed attention to the sport that I'd learned to love as a wee lad. I could never get enough of it. I ate it, drank it, daydreamed and fantasized about it. I was a truly whacked individual about it and then along came 1994.

What a sad year for the game that was. Strikes...pffft, it hurt everybody in and around that sport and '94 for many was the straw that broke the camel's back. The powder keg created by three plus decades of anger and frustration between owners and players finally blew up. The regular season was brought to a screeching halt in August and no post season ever occurred. Tony Gwynn never got to have his day, and I'm certain he was going to be the next .400 man. I don't think there was one fan that wasn't locked into every plate appearance that man made. Nope, denied. It also ended players careers and it ended my interest in Baseball, I was totally sick of it all. I sold off and over the years basically gave away almost all of the cards that I'd amassed since I was 8-9 years old. I kind of treated baseball like a girl you dated once. You see her around from time to time, but you never say anything, you just remember the good times you had together and move on. That's how it was for 25 years, then 2018 came along.

A woman that I'd known for six years, a cleaning lady at a Federal facility I work at, started asking people if they knew how to fix a baseball glove that she had. You see, her ailing husband was dying and one of his prized possessions was a 1st Baseman's mitt he'd had from the late 60's when he was 18 or 19 years old. She'd told me a lengthy story about how during that time he'd been seen and invited by a Mets Scout for a tryout and this was the glove he'd used. Unfortunately, he never did make it, but to be thought of as good enough to have a good look at? That's a feeling I think we'd have all loved to have. He played Softball for the rest of his days on what I believe were Puerto Rican leagues in both NY and then later here in MA and that glove had been with him every step of the way.

The story she told touched me. I then began to wonder about how much I'd missed because of how angry I'd gotten with MLB 25 years earlier. That it was moments like this that drew me to the game in the first place. Baseball had meaning. The anticipation, excitement, victories, and even the defeats, but most of all, the feeling of joy just being there alongside thousands of like minded @%#$*^&amp; insane baseball fans! I missed it, I truly missed it. Well, I told Glady to give me the glove and that I'd get it fixed. My personal goal was to have it repaired and that when the time came, not only would he have his entire family there, but they could give that old glove made anew back to him, back where it belonged. She got it to me the very next day. Suffice it to say, It was WELL used, an old MacGregor, and it was quite literally being held together by shoestrings. The webbing was separated, the mitt was bone dry, what original lace was there, were crunchy. It was beyond my skill to repair, so I sent it off to a friend in Texas for a complete overhaul which took a bit over a week. Sadly after all was completed and in the 2-3 day trip during it's return, Tomas left our world.

Naturally, the glove, though it looked great again was "raw" and now that Tomas had passed, I wanted to honor the man properly by encasing that glove with a plaque to remember him by. When I'd put everything together, I gave it to Glady on her way home from work that night and told her to open it when she got home, that it was for her and Tomas, nobody else. She called me about 30 minutes later and I'll admit that she managed to make me shed a few tears. Baseball had meaning again. Since that Fall night in '18, baseball became part of my life again. It wasn't because the Red Sox were in the post season. It wasn't because my 8 year old son had recently displayed a great interest in playing. It was because of a nice old cleaning lady that was married to the greatest baseball player she ever knew.

It's nice to be back. 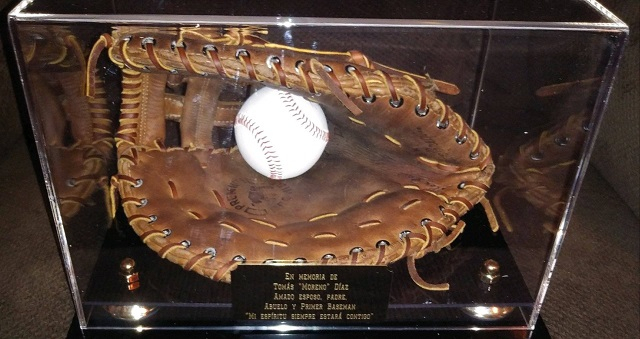 The mitt on his favorite chair and there it remains to this day according to Glady.